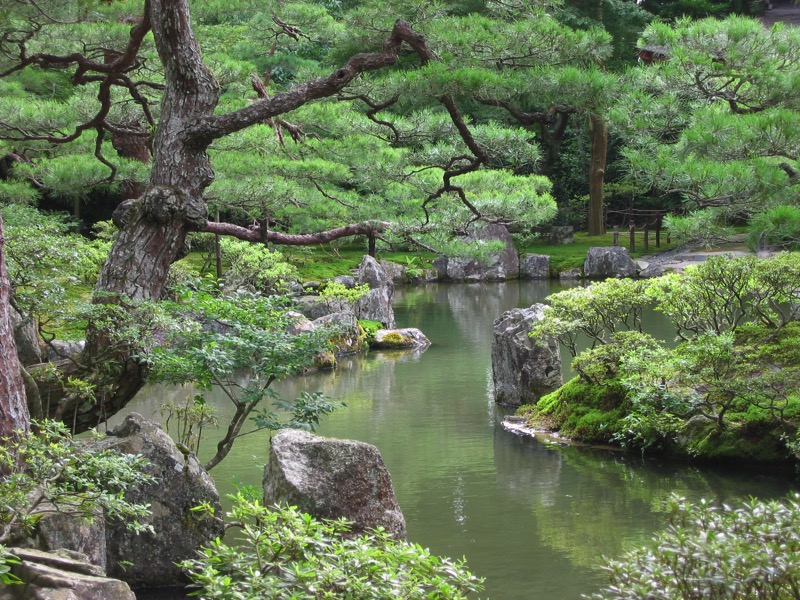 In À rebours (Against the Grain), the novel by Joris-Karl Huysmans (who features prominently in Michel Houellebecq’s timely novel Soumission), the ‘hero’ Jean des Esseintes furnishes his bedroom as to look as cheaply as possible, using the most expensive materials. In some sense, traditional Japanese gardens are trying something similar: They are designed to look as natural as possible, but simultaneously without any flaws.

Even the mosses are selected carefully as ground covers to suit their destined location. This is a photographer’s paradise, because literally every view is perfect. No fallen branches or other imperfections spoil the view. 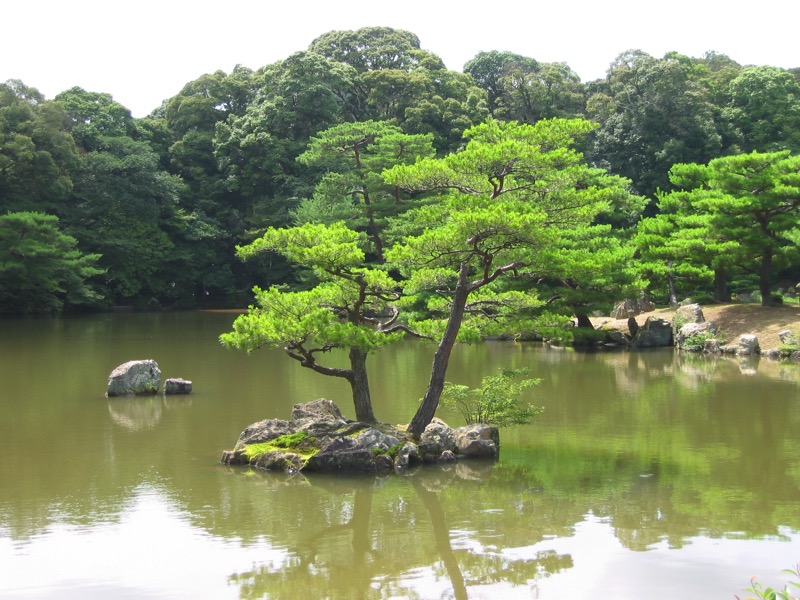 Often, these nature gardens are contrasted with rock gardens, that are minimalized abstractions of nature.

The combed patterns of pebbles near islands of rocks or vegetation look like waves at first glance, but reveal a stronger sense for geometric abstraction when looked at from a greater distance. Instead of showing a physically realistic interference of wave patterns, we see a layering of shapes. 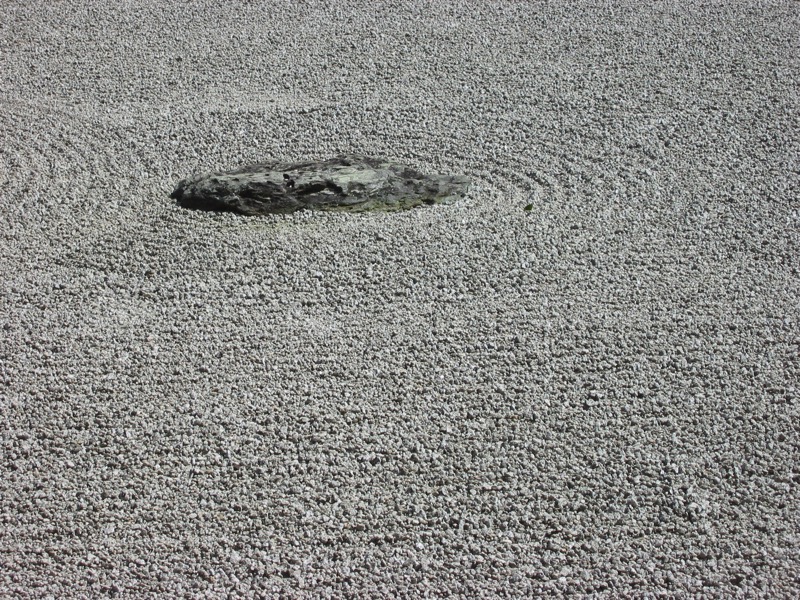 These pictures were taken when I had the chance to stay in Kyoto for two days. This is a city of great tensions between layers of a conserved past and an unknown future. What unifies it is the strong presence of contemplation one can find everywhere. 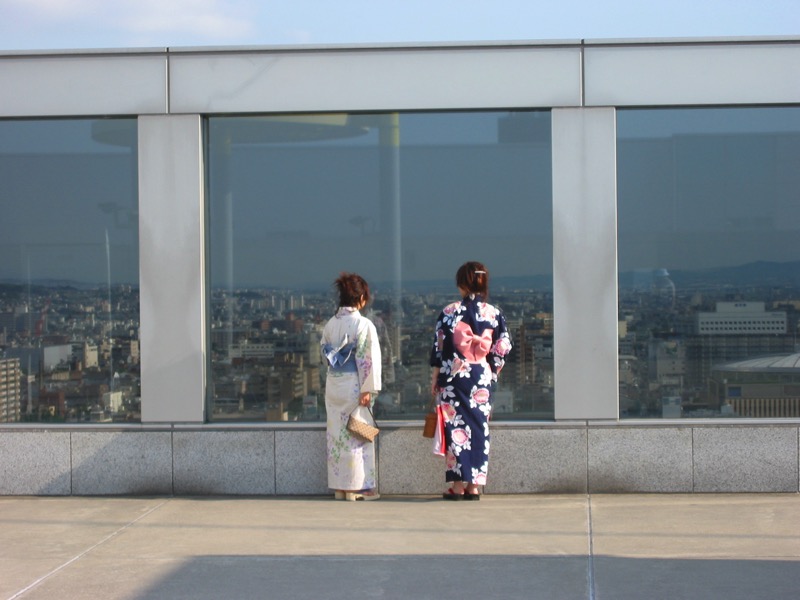 The dune grass or marram grass or ammophila which can be found at the coast of Lake Michigan (for instance) is an interesting plant. It likes to watch and protect the border between the lake and the sand, protecting the latter with its extensive root systems.

Its religion is that of the wind. Its longest stalks barely touch the ground, but when swayed by the wind, they leave traces in a indecipherable language. 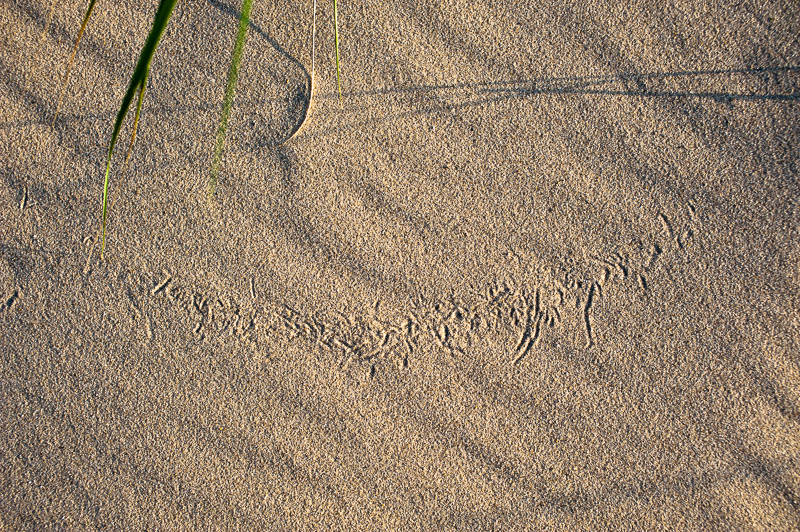 It is precise, beautiful, and temporary. 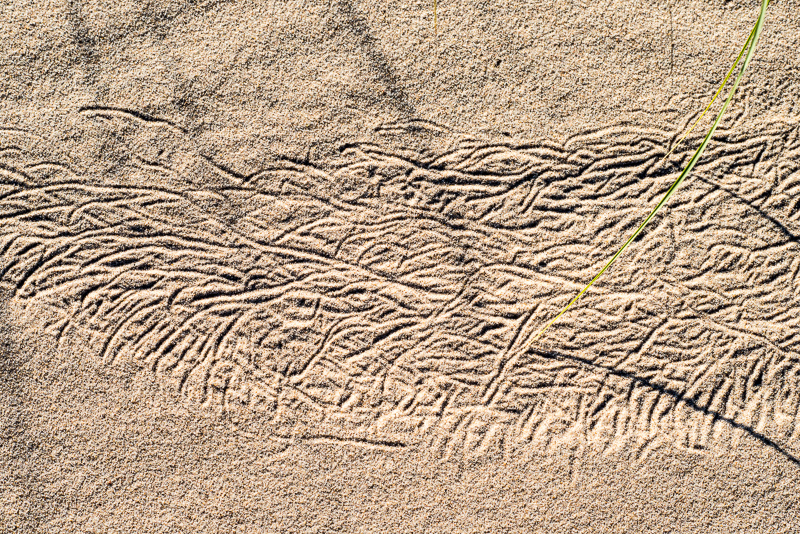 And the rain fell, and the floods came, and the winds blew, but the grass did it anyway.

What human artist would dare to compete?

Objects in space can be either separate, intersecting, or touching. Spheres always intersect in circles, and the most fundamental case is when the angle of intersection is 90º.

For what’s to come, let’s also look at these circles just in the first quadrant. 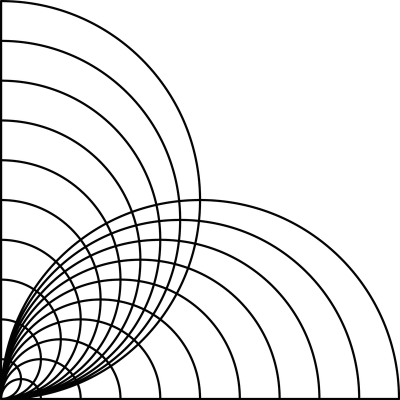 The same procedure works in space with now three families of spheres. Each family consist of all those spheres that touch one of the coordinate planes at the origin. Viewing these in the first octant only and head-on, i.e. in the direction of the main space diagonal, shows patterns that disguise their origin quite well. 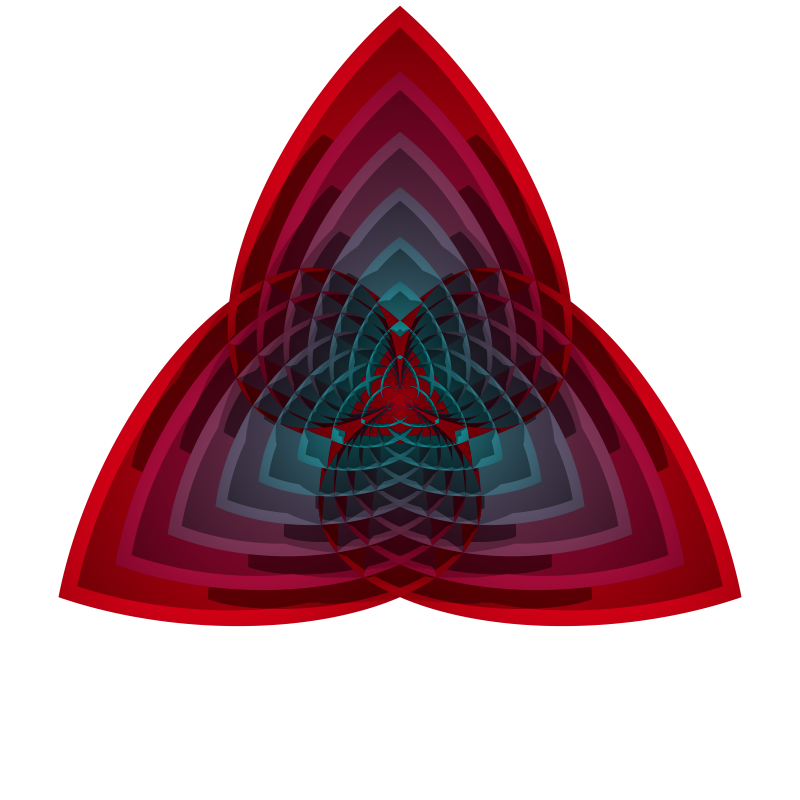 Again, like in Spheres I, the alienation becomes extreme when we pretend that the objects are part of some large piece of architecture. The walls of the facade show the same pattern as the intersecting circles. 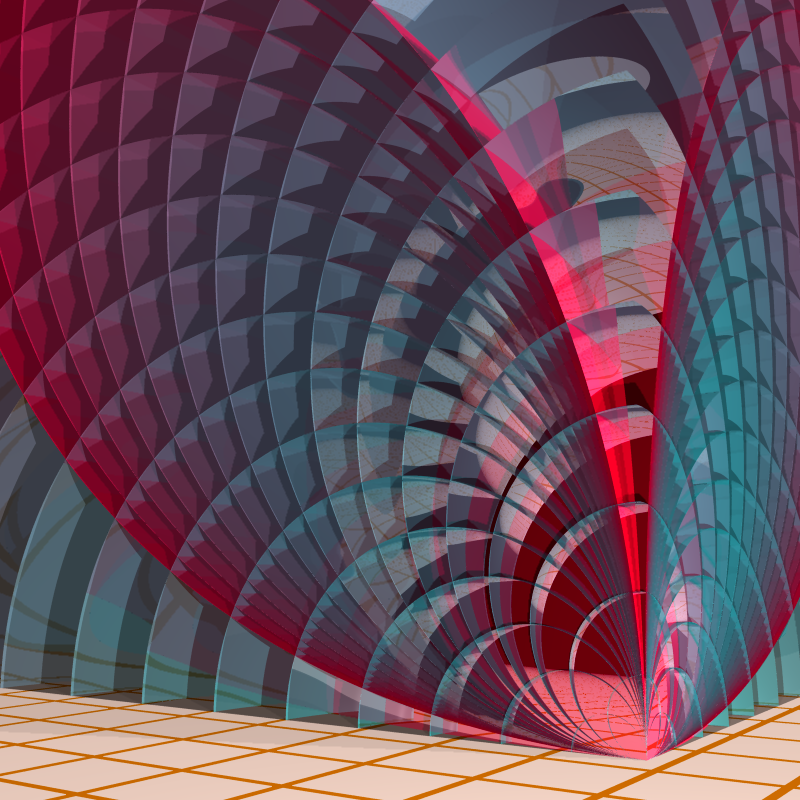 This way geometry becomes hermetic. Instead of explaining a theorem, the statement is disguised in pure appearance.

In 1997, the software department of our local book store sold heavily discounted copies of the Raytracing program Bryce,
because they had accidentally ordered Mac versions and were selling only Windows software. I purchased a copy, not knowing what this
would get me into.

I had been making images of minimal surfaces the past year with Mathematica, and the 3D graphics of Mathematica could be first exported into Autocad DXF files, and then imported into Bryce. 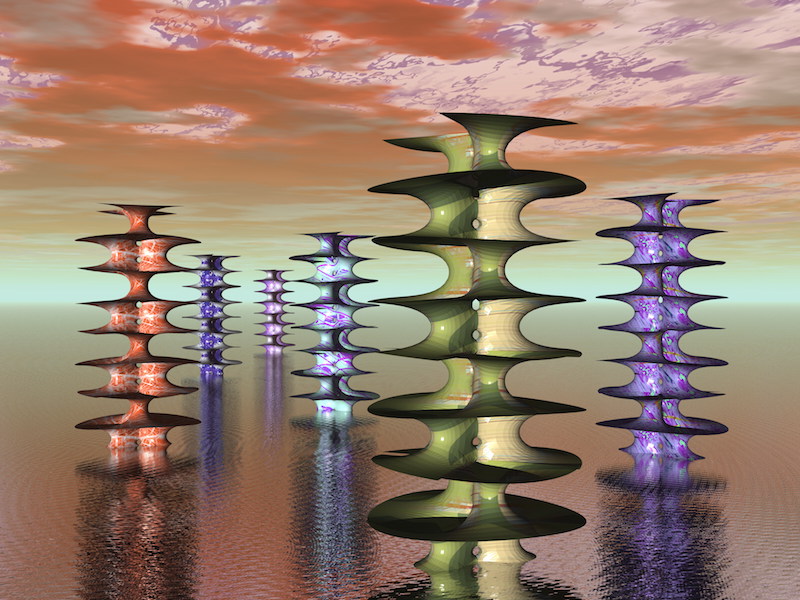 Bryce is primarily a landscape renderer. The tools let you create terrains, and it comes with a sophisticated texture editor that lets you literally compose all kinds of textures for your objects. 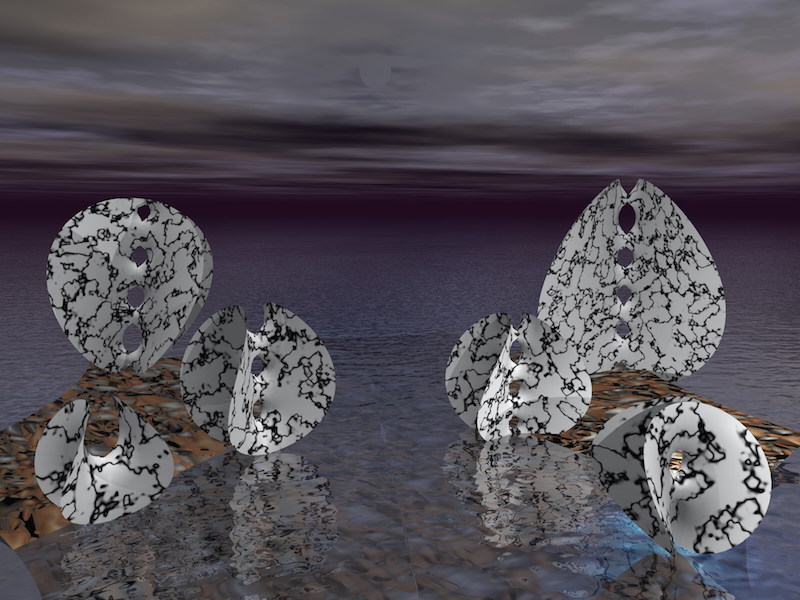 In 1997, computers were slow. Most images had to be rendered over night, to get screen filling sizes. And these were screens from 1997, too. 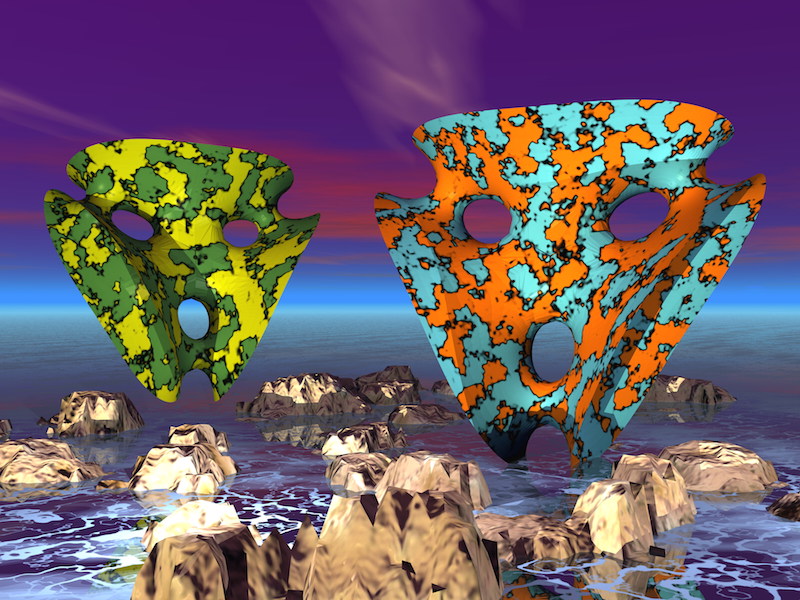 The user interface of Bryce (by Kai Krause and Eric Wenger) was revolutionary, and still leaves not much to be desired today. In 1999, Bryce reached its high point with a a vastly improved texture editor. Then the decline began. Fist, it was sold to Corel, and then to DAZ 3D. 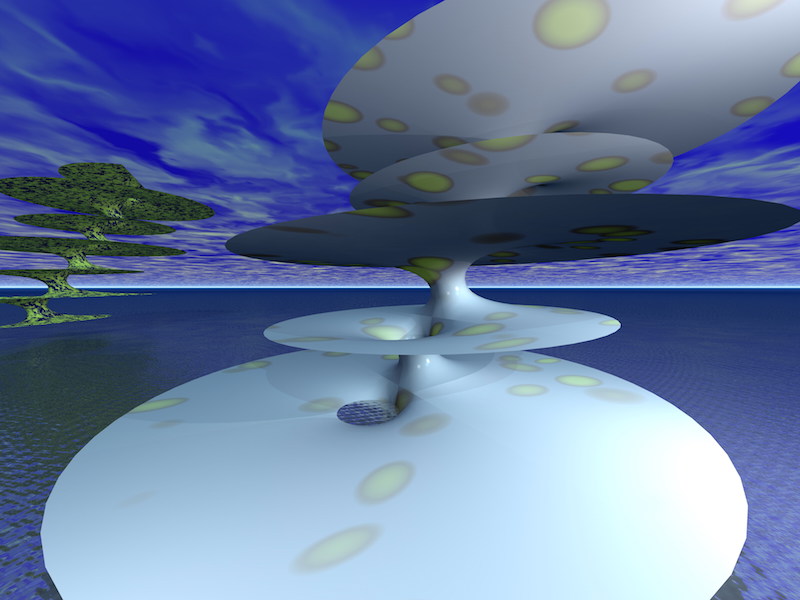 The current version is Bryce 7, and does not work with recent Mac OS X versions. In runs under OS X.6, but is quite unstable, preventing me to rerender the old files to proper sizes.

This has been a lot of fun.

I had the opportunity and was in the physical condition to climb Mount Whitney in the Summer 1994 as a day hike, when no day use permit was required. So these are relatively ancient photos. 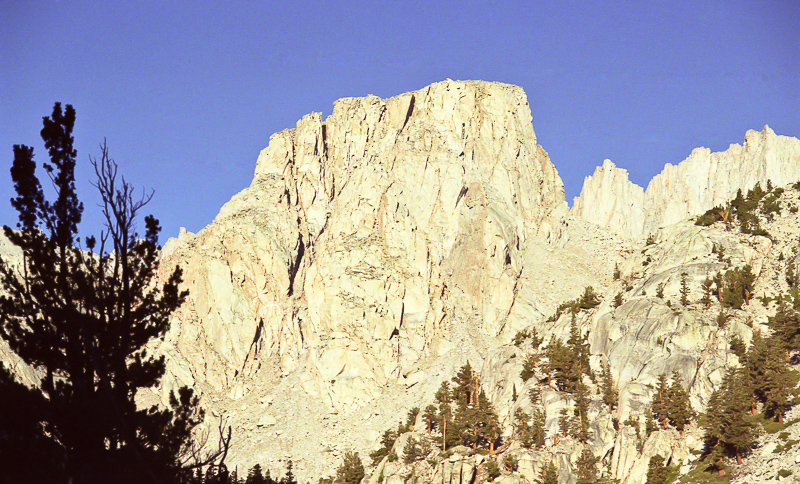 The hike from the parking lot at the Whitney Portal and back took 10 hours. The 2000 meters elevation gain put a lot of stress on the muscles (uphill) and even more stress on the bones (downhill). 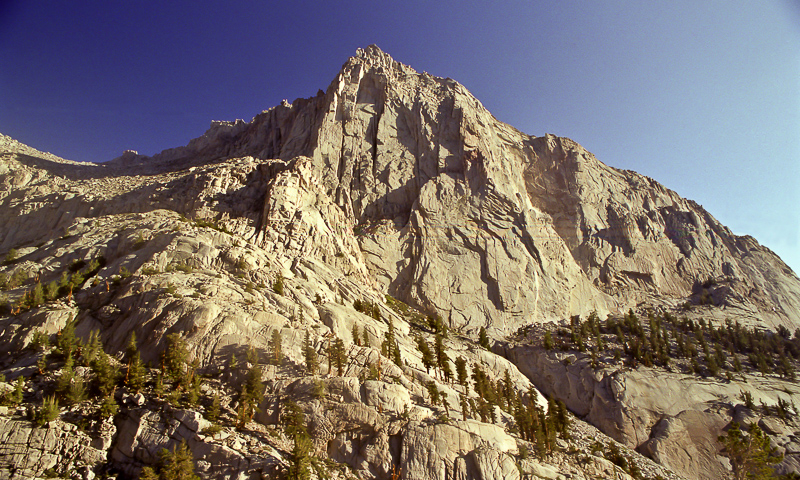 At the same time I had become addicted to classical indian music, and Hariprasad Chaurasia’s rendering of the Raga Kaunsi Kanhra played back in my brain during the first hour of the hike.

We started at 6am in the morning before sunrise, and the first two hours were pleasant hiking through wooded areas. The first challenge were the infamous 100 switchbacks, which bring you fast to high elevation and to the Mt Whitney Trail Crest.

From then it is still a long way to reach the summit. In good weather, the hike does not pose any technical difficulties. But it is long, at high elevation, and in an alien landscape.

My favorite State Park in Indiana is Shades State Park. The ominous name is short for Shades of Death, and possibly refers to a battle between Native American tribes. I have already written before about the Silver Cascades Waterfall in that park, but it has many other spectacular features. One is called Devil’s Punch Bowl, where in the early 20th century visitors that arrived from Chicago by train were treated to a movie night. These people had guts.

In dark winter, the punch bowl is certainly the place that justifies the park’s old name most. For some strange reason, the bare dead trees remind me of Francis Bacon’s crucifixion paintings. 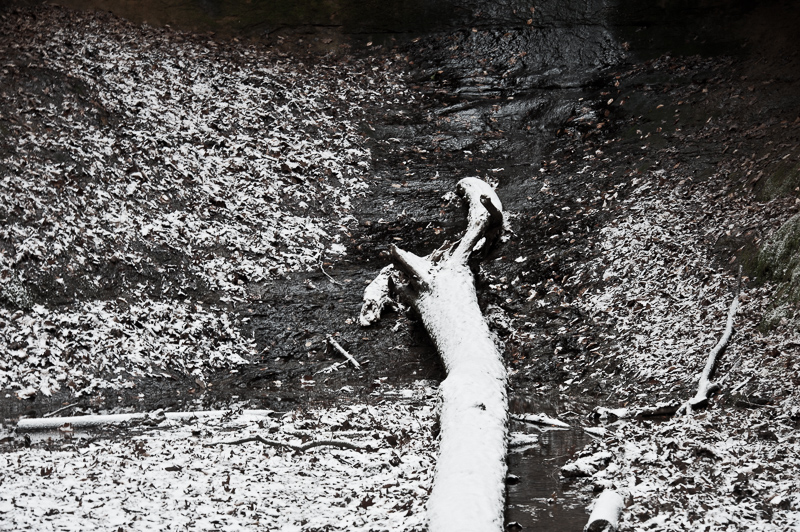 The punchbowl is the end of a short canyon that has more fallen trees. 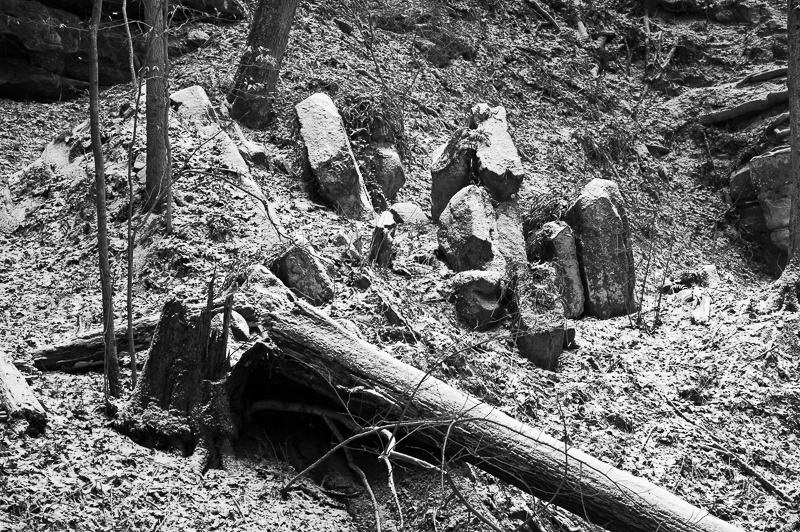 When the canyon widens, surprisingly the walls just get taller. One begins to wonder about the finale of this dramatic development.

Instead of a drop into the endless void, the canyon ends at the Silver Cascades Fall. That’s a counterpoint the composer of this landscape must surely be proud of.

Large scale mirrors like the surface of a lake are awe inspiring. They simultaneously create complexity and
order. The order comes from the inherent symmetry, and the complexity from subtle differences between original and
mirror image.

Things get considerably more complicated when the mirrors are curved. The Cloud Gate sculpture by Anish Kapoor (the Bean) in the Millennium Park in Chicago is a popular example. The multiple reflections create an immediately surprising chaotic richness of the reflection: Taking one step to the side changes the appearance of the reflection dramatically. But the sculpture also extends and therefore enriches the architecture.

Motivated by this, I began to experiment with the spherical mirrors, spheres being the simplest curved shapes.
For multiple spheres touching each other there is a surprising phenomenon that is best understood when we begin with seven spheres of equal size, one at the center, and the remaining six surrounding the central sphere symmetrically. Complete this configuration by adding two planes that touch all seven spheres. Now pretend that the two planes are in fact also gigantic spheres. Than these two and the central sphere all touch the remaining six spheres, which in turn form a chain where consecutive spheres touch.

It turns out that this picture is not just an approximation that only works in the ideal situation shown above where the big spheres are planes, but in fact works for spheres of any size. This is the content of Soddy’s theorem. 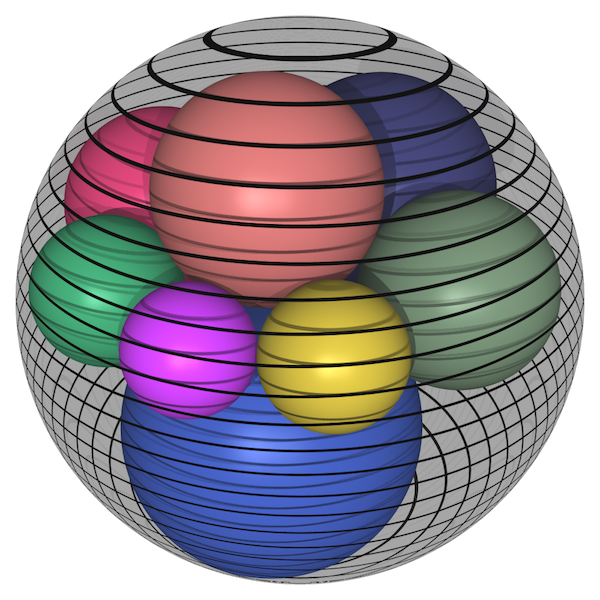 Now imagine these being really large, reflective, slightly translucent, and illuminated with colored light sources. You might see something like this: This is the first of a series of images featuring ray traced spheres.