I started this little blog with visual aphorisms one year ago, so maybe this is reason enough to revisit the very first post, by spending one hour at Strahl lake in Brown County State park.

This one  hour is how long it takes between dawn and the moment when the sun rays touch the lake at the western lake shore.

The early morning fog awakens and begins to move in ways impossible to capture in a single photograph. 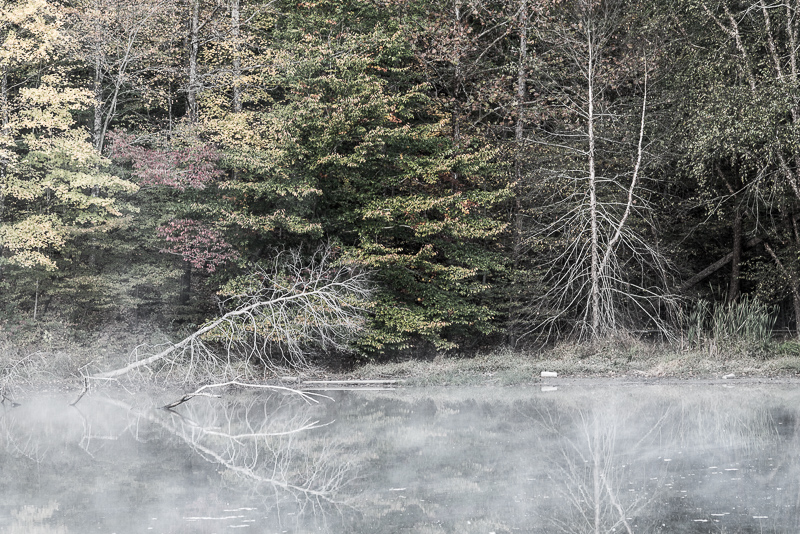 The wind leaves strange messages on the water.

When the sun finally hits the fog, eery hologram like sculptures appear in the lifting fog.

And then, of course, day is here.

Making photorealistic images of minimal surfaces is one thing, but making real models of minimal surfaces and putting them into the landscape is quite something else. In July 2015 I was contacted by the Swiss artist Shireen Caroline von Schulthess who planned to do exactly that. She needed 3D models in order to build large wire frames that would then be wrapped in thin, colorful fabric. These sculptures would serve as loud speakers for recorded voices from local interviews with the topic “wishes”, to be played as an installation at the Lenzerheide Zauberwald festival.

Here is the wireframe model of the Finite Riemann minimal surface. Given that I already have difficulties bending a single metal coat hanger into a given shape, I can only admire the skills of Shireen and sculptor Adrian Humbel to accomplish this at this scale.
Below is the partially clothed 4-Noid. 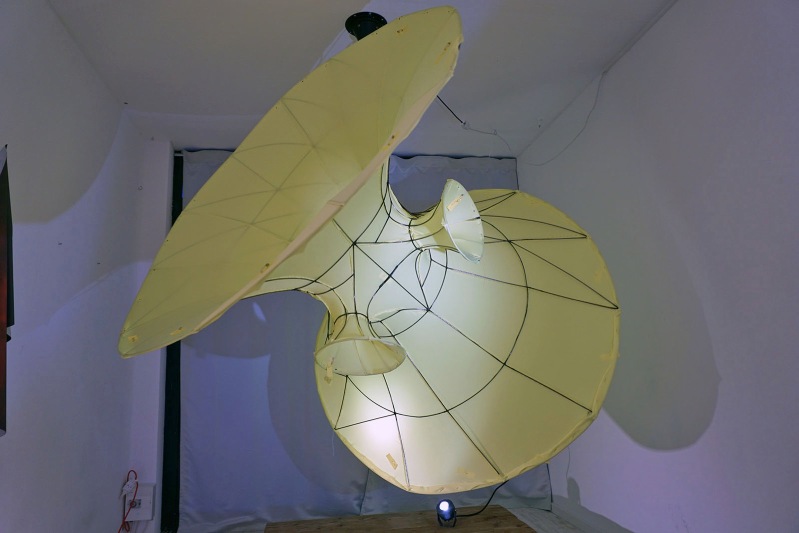 And this is the Finite Riemann surface, fully clothed. 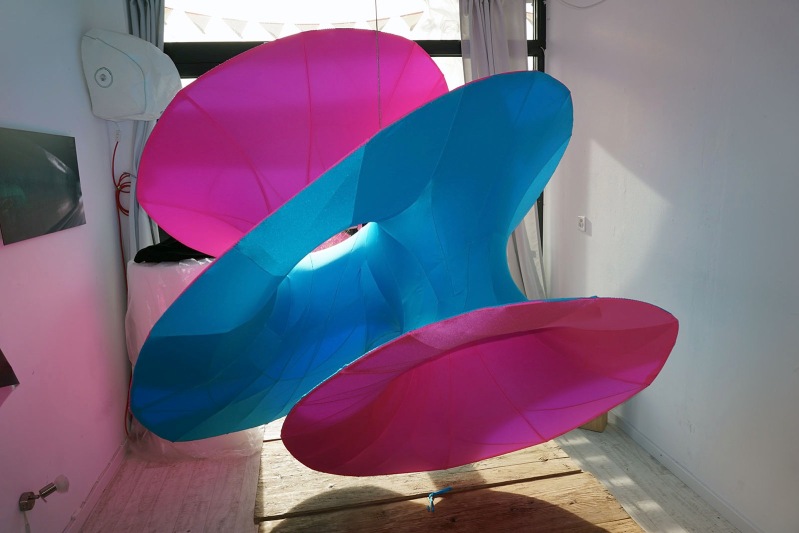 All three of them, ready to be released into the wild, and weather proof. 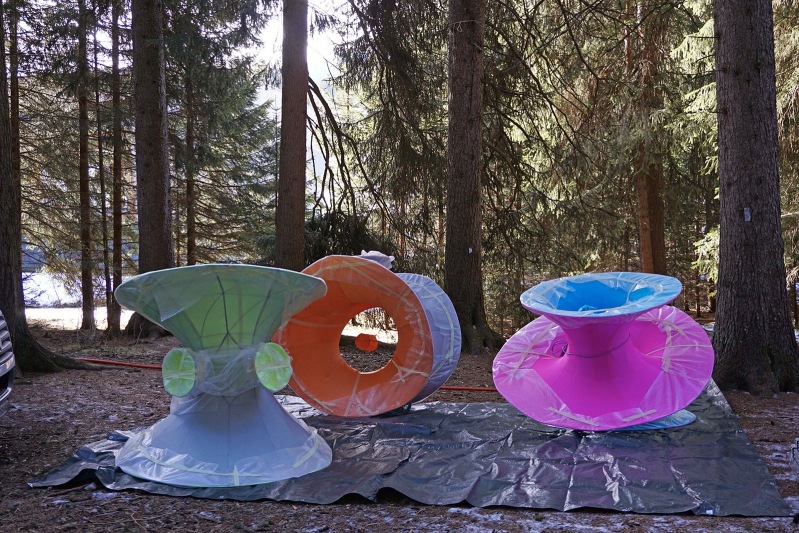 Not even the installation is easy:

To bad I can’t be there. This must be quite an experience.

All pictures in this post were taken by Shireen.

After a few days in Yucatan, I left most of my luggage in the hotel, and went on a three day road trip through Yucatan. The first stop was Chichenitza. If you ever travel there, arrive early. 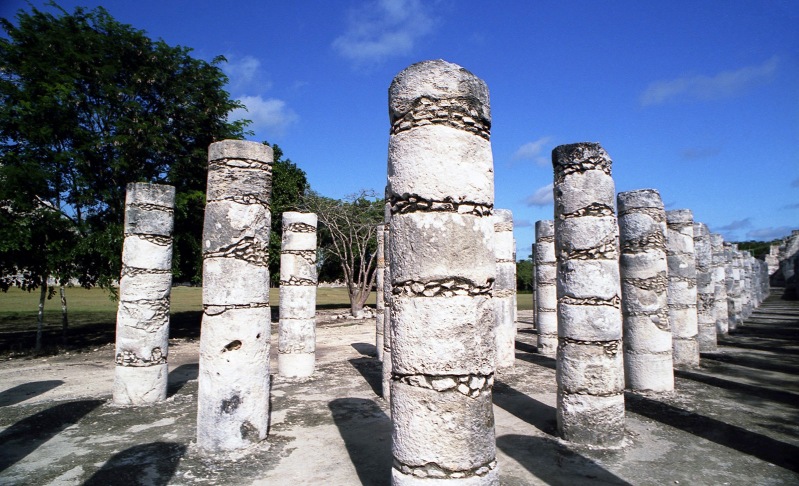 New Year’s day I spent a night in a hammock in Playa del Carmen, had an easy morning swim in the Caribbean, and a fantastic breakfast. The nearby ruins of Tulum show that the Mayas knew to live.

Then I hitchhiked to Coba to get an idea what the less visited Maya places look like: More jungle, fewer tourists, interesting animal noises, large spiders. Here at last I had the feeling that around the corner there could be some left over piece of the real Maya civilization.

The next morning I took the bus back to Merida, for recovery and more sightseeing. 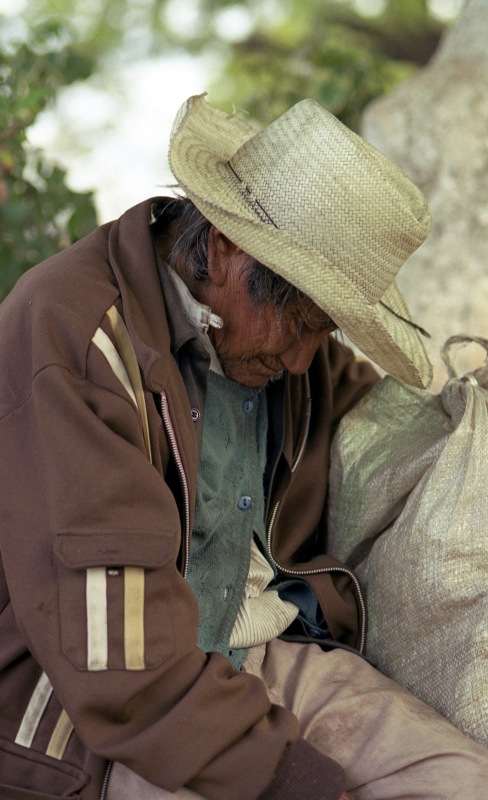 A colleague of mine who grew up in Greece claims that the food in the United States is not as fragrant as in Europe. I don’t know how to argue either way here, I certainly had tomatoes with no flavor at all on both sides of the Atlantic Ocean. 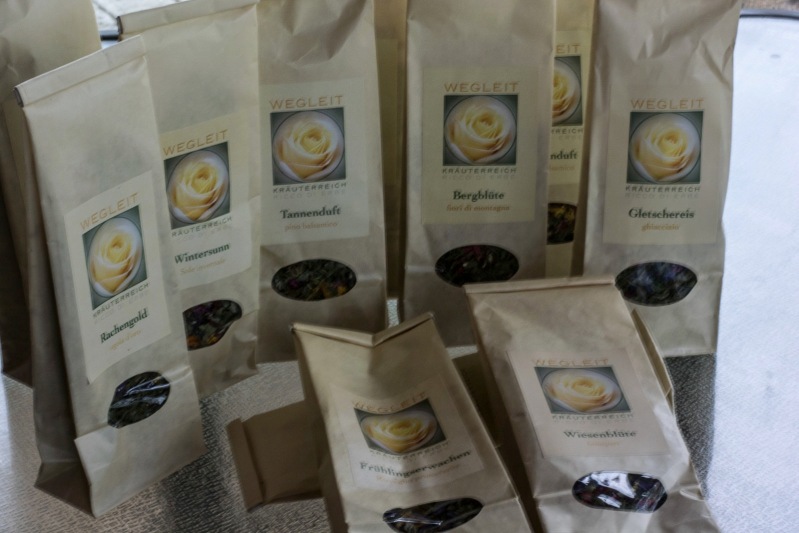 I also don’t doubt that mass produced food tends to be quite bland everywhere, and local produce can bring out the terroir in any food more easily, most often to its advantage.

So I blatantly lied when I claimed that the Ultental was unremarkable. Its cuisine is quite remarkable. For instance, there was (is?) a local butcher who carried all kinds of interesting meat that had grown up locally. Yes, I know, but what would life be if we wouldn’t sin once in a while.

Then there are the local herbal teas with promising names like Gletschereis (Glacial Ice) or Tannenduft (Fir Smell). These were among the most intensely aromatic herbal teas I have ever tasted.

They were so good that we had to mail-order a truckload of them after we returned to Germany.

When I revisited the photos from the area about a month ago, I became curious whether these teas would still be available. And yes, thanks to the internet, one can not only find them but also order them (via Germany). And yes, they are still as fragrant as I remember them from over 15 years ago.

“What do you call the desert out yonder?” McTeague’s eyes wandered over the illimitable stretch of alkali that stretched out forever and forever to the east, to the north, and to the south.
“That,” said Cribbens, “that’s Death Valley.”

Backpacking in Death Valley seems like an odd idea, but it’s not so bad, if you pick the right time of the year, and the right people. I did so with members of the California Hiking and Outdoor Society (CHAOS) in December 1993. 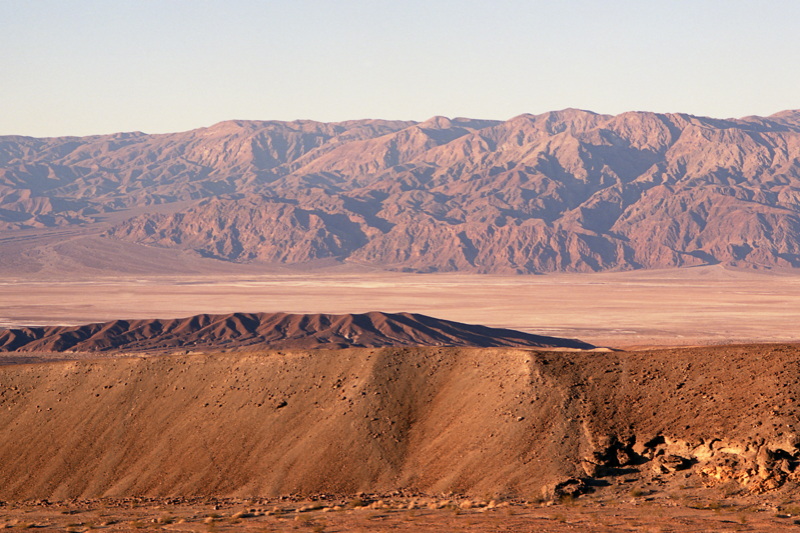 The daytime temperatures were quite pleasant, but at night they would drop below freezing. So we had to pack warm gear, and in addition 2 gallons of water each. So I was bit worried about the weight of my camera, but I decided to pack it and to leave the bottle of wine at home instead.

One of the new people was Tuan, who had brought his large format camera (in addition to an SLR with several lenses).
I asked him politely whether this wouldn’t be too much to carry, and he responded equally politely that this would not be a problem.

I learned later that Tuan had worked as a mountain tour guide in the Alps, was an experienced ice climber, had climbed Denali (and many other peaks), and was in the process of documenting all National Parks of the US in large format. Tuan also taught me to value the 24mm and 85mm focal lengths for landscape photography. One certainly met interesting people at CHAOS.

So in many ways this trip had been an eye opener for me, for landscape, for people, and for photography. 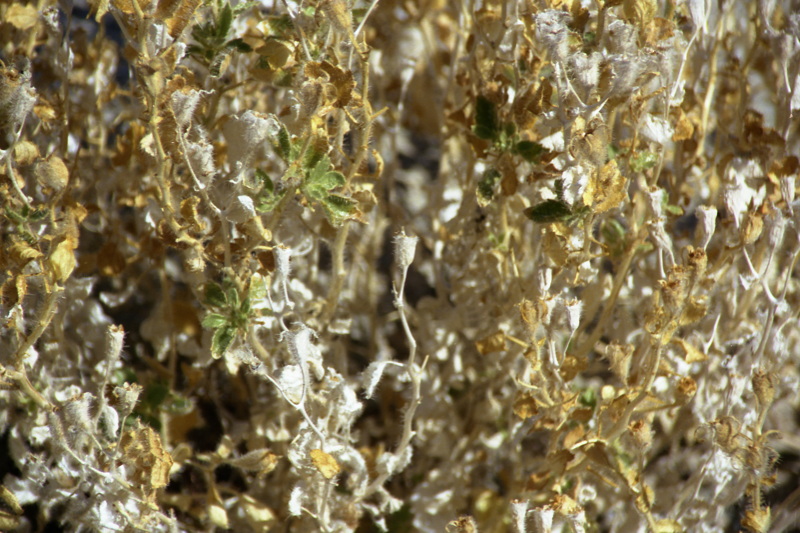 Late Summer 1997 I went with my girl friend for a second time to South Tyrol, this time visiting the Ultental near Meran. The valley itself is unremarkable. Its elevation is at about 1500 meters and the steep mountains reach easily 3000 meters and more.

However, at a certain elevation, everything opens up, 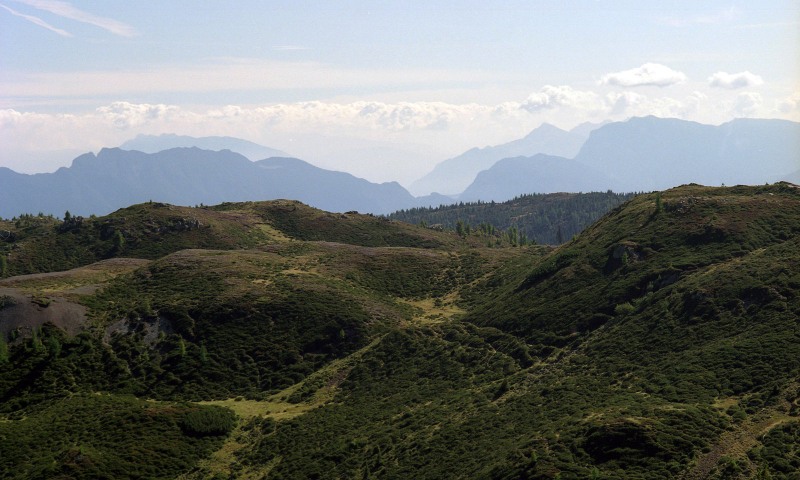 and one has the opportunity for endless ridge walks which are so typical for the mountains of Southern Tyrol. 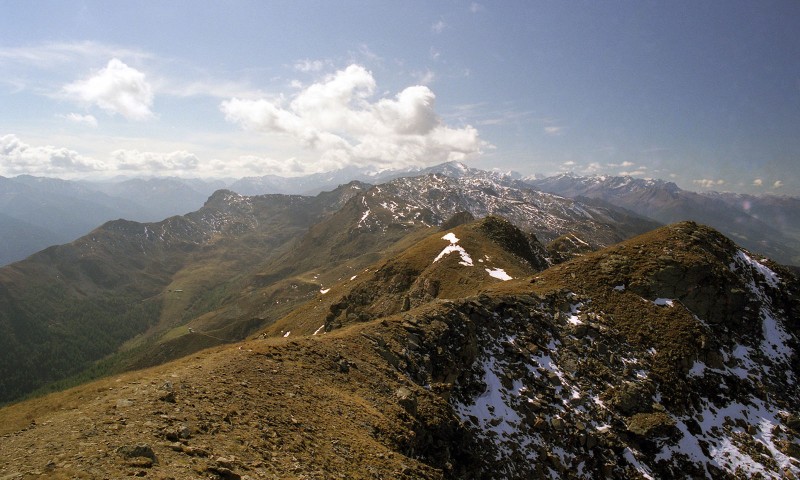 At even higher elevation and after fresh snow fall the landscape becomes truly alpine.

At this occasion (spending the night at a mountain hut), we learned something valuable: Whenever you sleep in a room you are not familiar with, look into all the closets. This is not to foster one’s superstitions, but to find the warm blankets that could have prevented us from shivering through a very cold night. 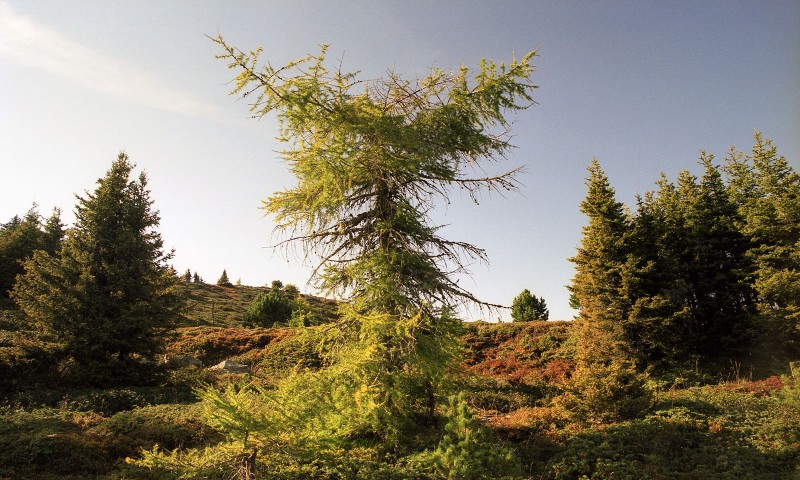 So I could not resist to try out how my ancient Sigma 600mm/f8 mirror lens does on a Nikon D800. So out I went into this year’s mediocre winter.

The static motives one can find in the woods are tree stumps, rocks, and dead leaves. Cheers.

All pictures here are reduced in file size by about the factor 20, thereby sharpening quite a bit. None of the some 50 pictures I took were sharp at full resolution, but the scaled images look decent. 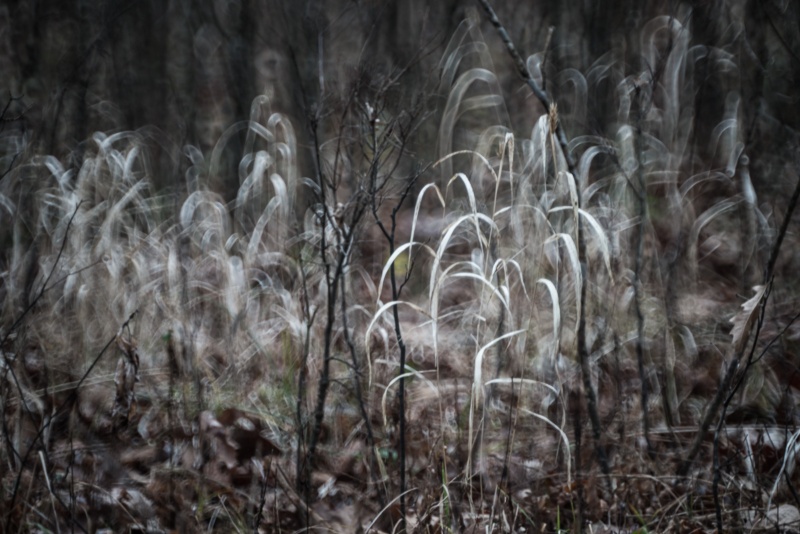 So this is not a miracle lens. A solid tripod and precise focussing are a must, at least when it is as gloomy outside as it is here now. 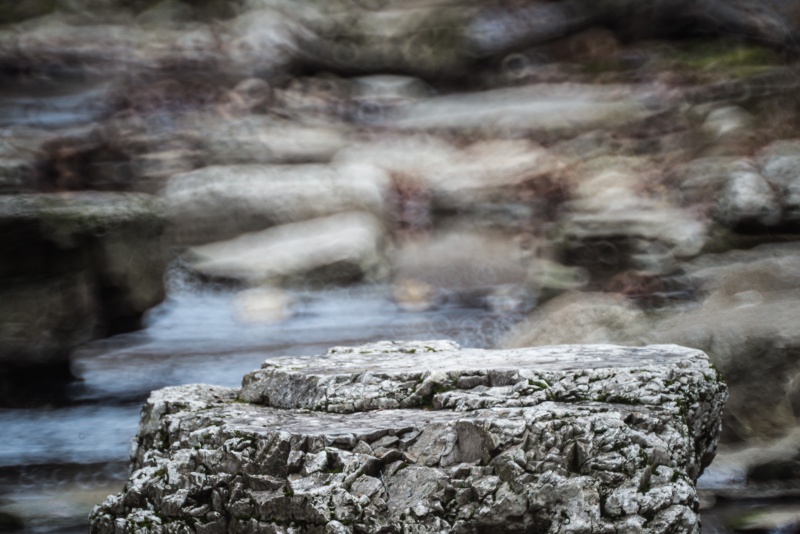 But this was not the point of the experiment. I wanted to play with the background distortions caused by the mirror design of the lens. The ideal targets were either small or far enough away, with some sort of non-uniform background at about twice the distance to the target. 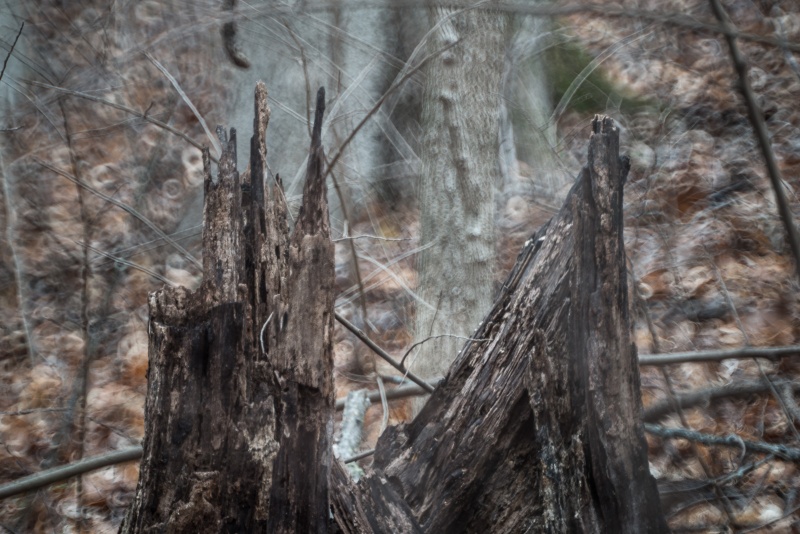 I usually use only telephoto lenses up to 200mm, and finding small targets in the distance is a great visual training. 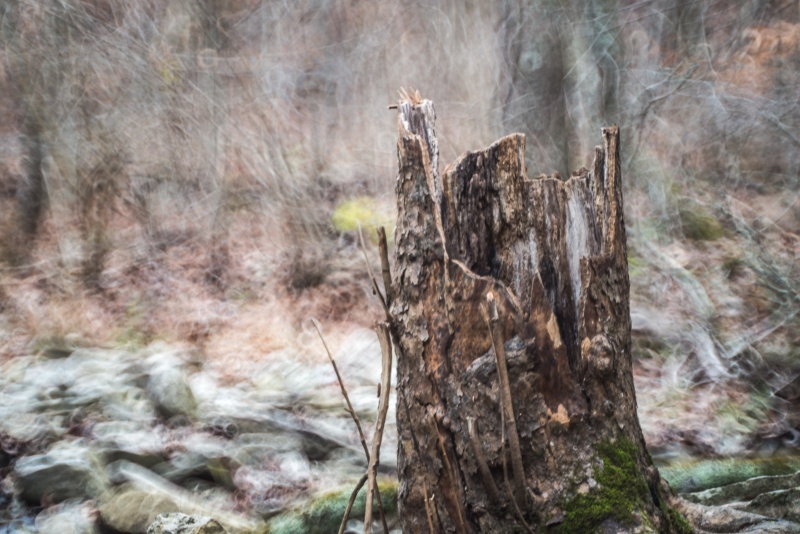 The Inner Frame
Blog at WordPress.com.