Every flat 2-dimensional torus can be obtained by identifying opposite edges of a parallelogram. 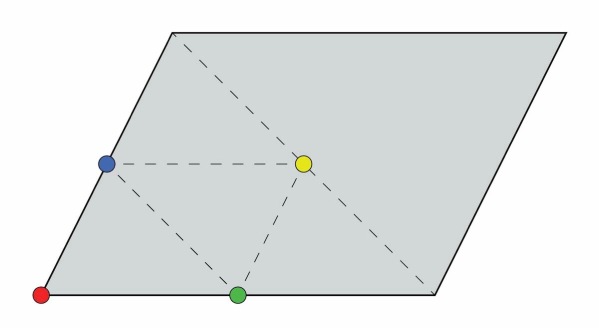 Each such torus has an involution that fixes four points, marked in four colors above. We can visualize the quotient as a tetrahedron with 180 degree angles at every corner by taking the triangle consisting of the lower left half of the parallelogram, and folding it together.

So the space of all tori is nothing but the space of tetrahedra. Each such tetrahedron determines a unique point on the thrice punctured sphere. This can be seen by constructing the elliptic function on the torus determined by sending red to infinity, yellow to 0, and green to 1. The unique point is then the value of blue, and is called the modular invariant of the torus. To go backwards, take a point in the thrice punctured sphere and compute the quotient of elliptic integrals (using independent cycles)

This complex number is the ratio of the two edges of the parallelogram that defines the torus.
This map is a Schwarz-Christoffel map: It maps the upper half plane to a circular triangle with all angles 0.
Restricting it to the upper half disk has as its image one half of such a triangle, namely 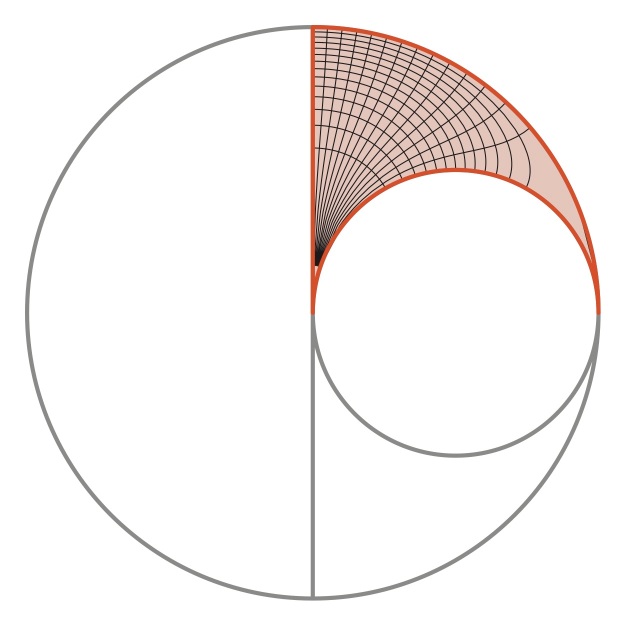 Let’s repeat all this starting again with a parallelogram, which now has been removed from the plane. 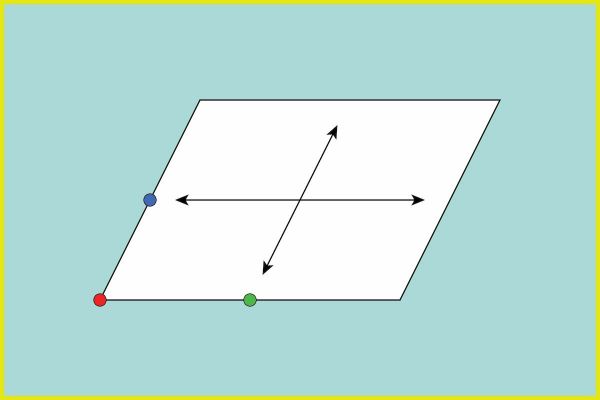 which maps the upper half disk to a different circular polygon:

Curiously, we see that the ratio of the edge vectors of the parallelogram can now also lie in the lower half plane or even be real, in which case the parallelogram degenerates. For instance, we can construct a torus that corresponds to the quotient -1 by slitting the complex plane from -1 to 1, and identifying the top of the slit from -1 to 0 (resp. 0 to 1) with the bottom of the slit from 0 to 1 (resp. -1 to 0).

This corresponds to an ordinary torus whose parallelogram is a rhombs with angle 70.7083 degrees. Next time we will see what this torus is good for.

In this last post of my little series about North Iceland we return to Vesturdalur. Instead of revisiting the basalt cones at Hljóðaklettar, we hike another loop to Svínadalur.

It begins with massive basalt formations. When in Hljóðaklettar they were well placed accents in the landscape, here one is overwhelmed to the extent that one doesn’t quite know where to look. Then the landscape unfolds.

Who would want to live here?

The little mounds are what is left of Svínadalur, a farm abandoned over 50 years ago. One can barely trace the contours of a handful of small houses.

Who dares to build a home at a place like this where you have an open view of 50 km in every direction?

And then, after having built that home, why would you leave? The trail continues towards the Jökulsá á Fjöllum and the views become more dramatic again. 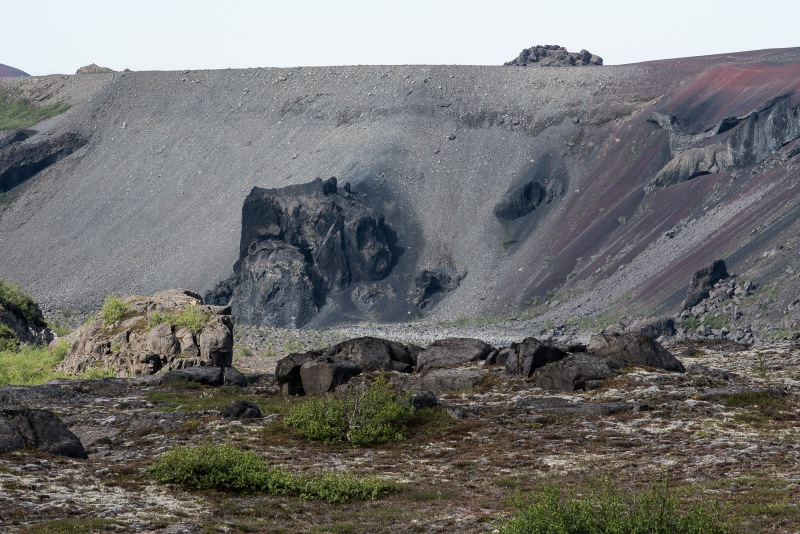 Maybe this place is too beautyful to bear it for too long.

If you expect a cloudless sky every day, Iceland might be a bit of a disappointment, even though it happens there, too, as you can see above at Heimskautsgerðið near Raufarhöfn. So one has to live with a few occasional clouds like below. 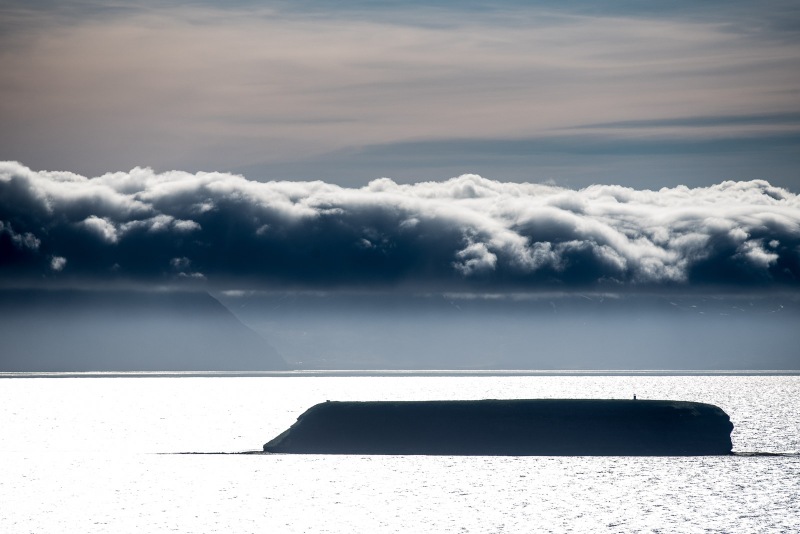 This is still excellent weather. How bad can it get? On a rainy day with complete cloud cover, the landscape varies between 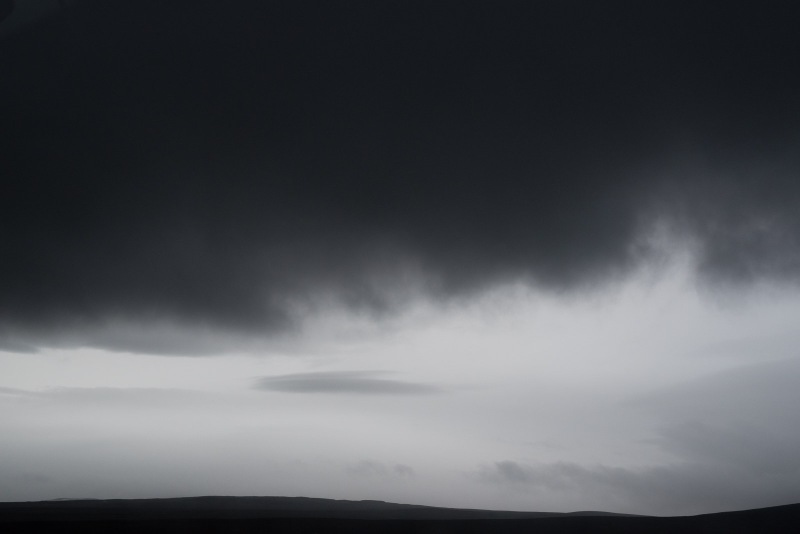 It appears inverted – the endless plains of northeast Iceland become insignificant compared to the enormous clouds above. Even though monotonous, they have their appeal, too. 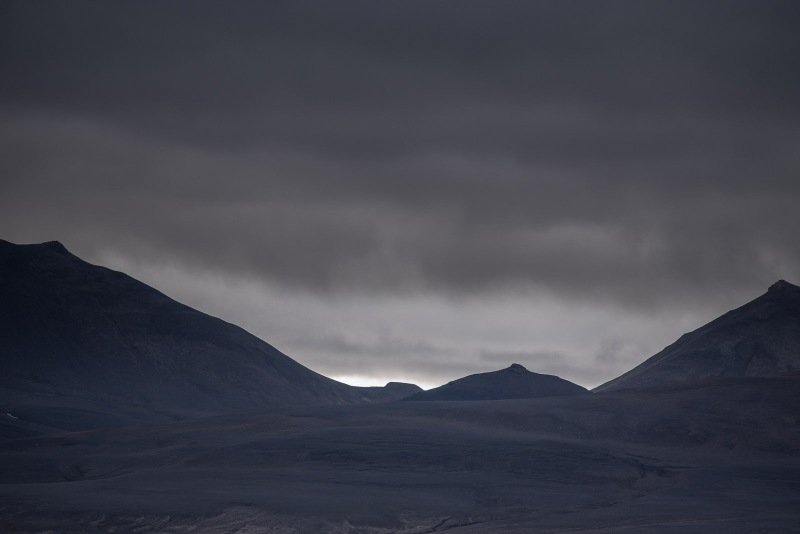 Finally, after a long drive through rain on dirt roads, even the back of our car looks impressive: 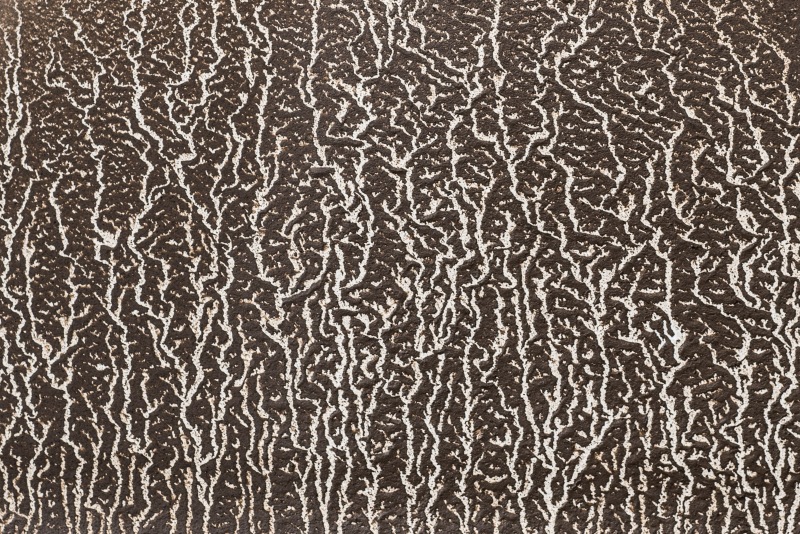 Like Dimmuborgir, Námaskarð is very close to Lake Myvatn. At the ground you see cracks and holes. Signs of otherwise rare creepy crawlies?

Ominous bubble are visible in the little puddles.

When you lift your head, you quickly lose all hope for discovering new life forms.

You nose will have told you long ago that this is not paradise:

We are in the middle of highly active sulfur springs.

This is a fun place to be, briefly. 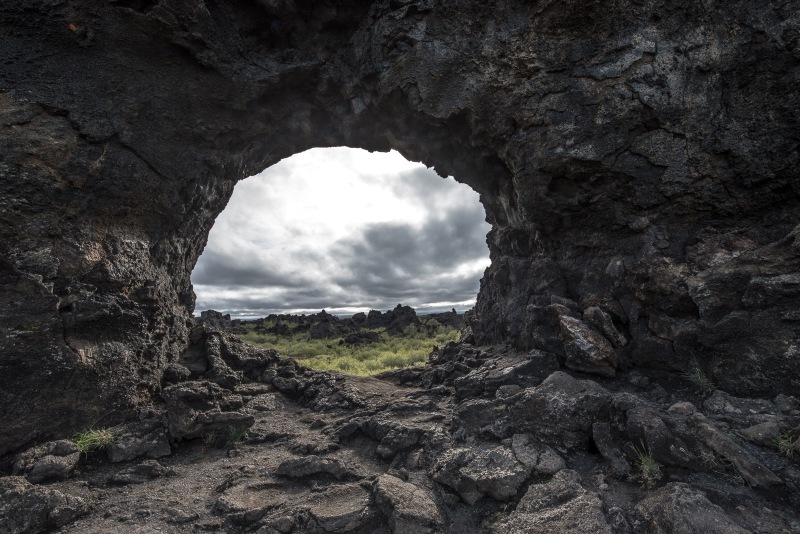 Dimmuborgir (Dark Castles) is a lava field near the much more mellow Mývatn area.

Allegedly, here it is where Satan landed after his fall (or did he leave deliberately?).

What makes the place spooky are not so much the bizarre rock formations but rather the cracks one can see everywhere: Are they just signs of decay, or an indication of growth and an immanent emergence of something else?

At least, the holes and tunnels seem to always promise a way out. 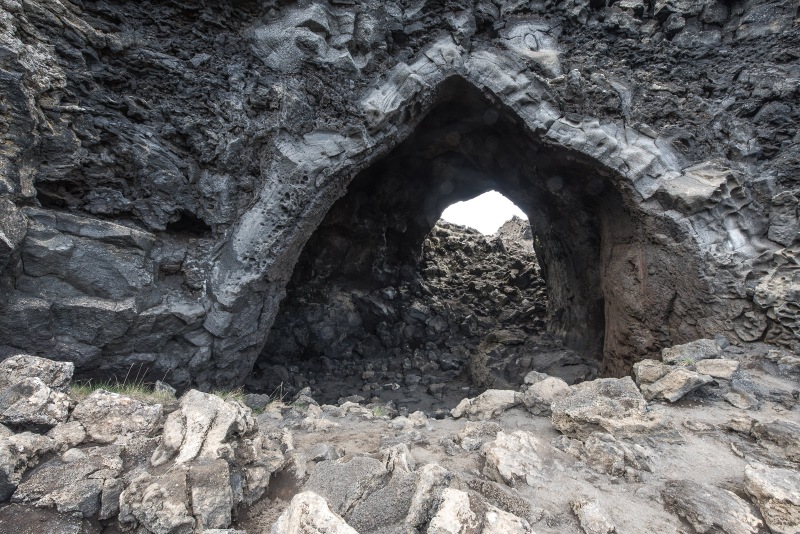 But what about those who got stuck and now have to look back at us, frozen in rock for millennia? 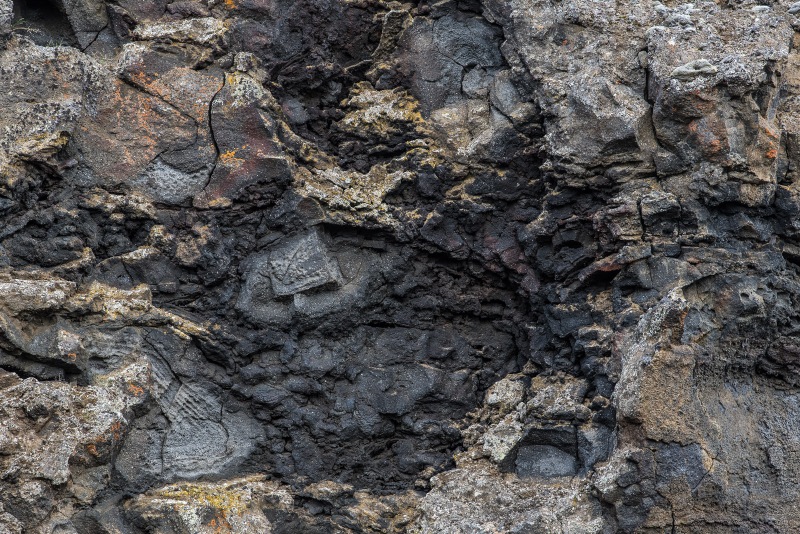 Between Dettifoss and Selfoss, the lava field landscape is often filled with rain and spray water. This contributes to a micro landscape with very little vegetation.

create an illusion of being aerial photographs of a much larger landscape,

in which the ground seems to float between endless water and sky.

Maybe these are the dreams of our planet about future landscapes, to be built after we are all gone.

The two bridges up above and below over the Jökulsá á Fjöllum (which we saw in my recent post about Hljóðaklettar) are about 50km apart.

In between, there is no reasonable way to cross the Jökulsárgljúfur canyon. The entire area is a gigantic flood plain, with the flooding occurring every few thousand years, and caused by volcanic eruptions under the Vatnajökull, the glacier that gives the National Park its name.

In between the bridges are three enormous waterfalls. Let’s begin with the Hafragilsfoss.

In this region, water seems to come from everywhere. 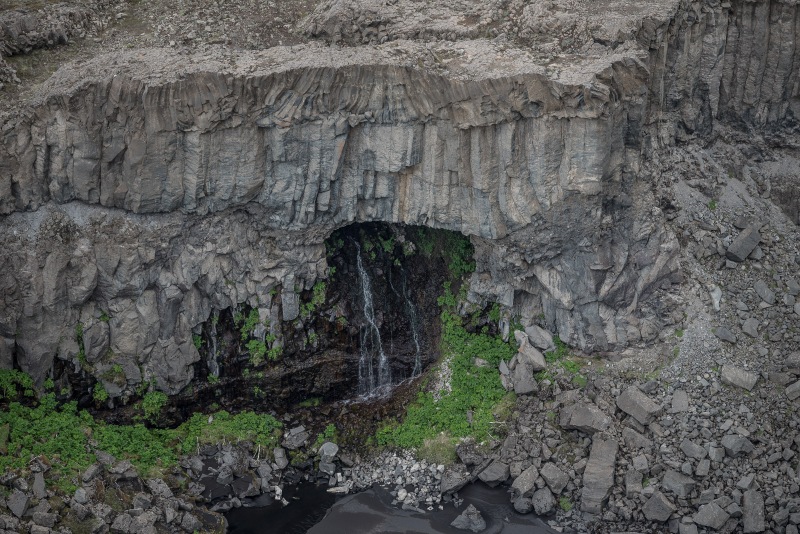 A little further south is the Dettifoss. Below are pictures from both sides of the bank.

It is impossible to convey the physical experience of the falling water in pictures.

This is a perfect place to be quiet. 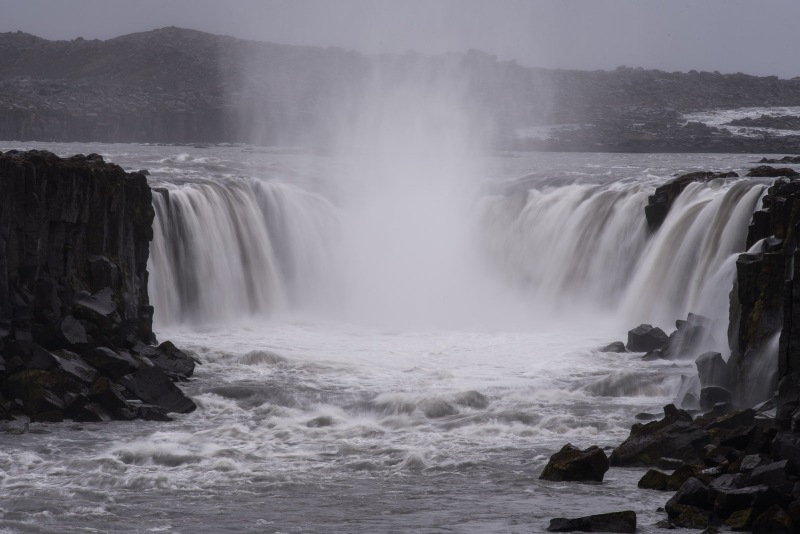 Next time we’ll have a close look at the micro landscape between these falls. 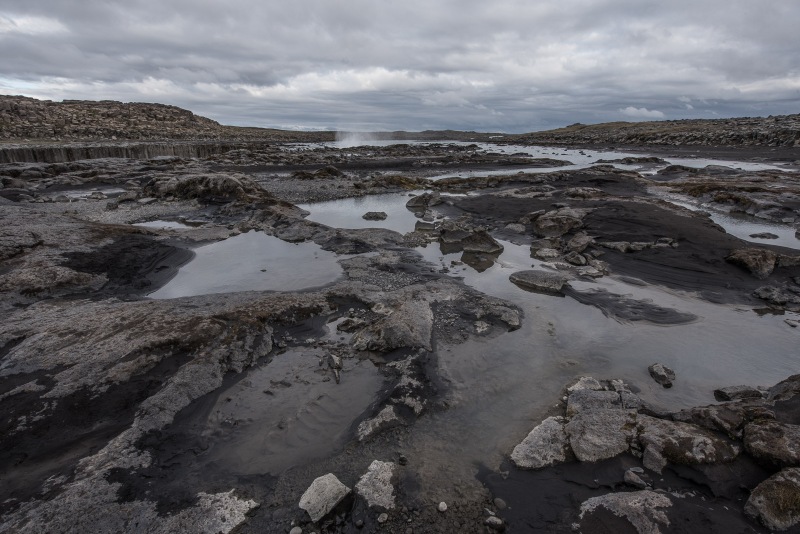 The Inner Frame
Create a free website or blog at WordPress.com.