A birthday in quarantine is a limited experience.

Above is the 2020 Glenburn Moonshine Elite, the only Darjeeling that has made it to me this year so far. An amazing tea.

Below are some Pu-Erh cakes that will hopefully last a year.

More food, for heart and brain: 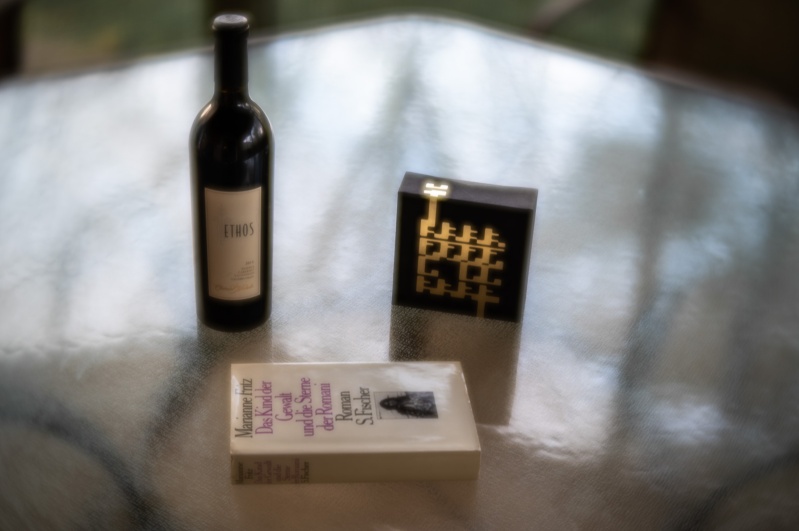 Of course there needs to be a puzzle. Let’s call it Quarantine. You have to go on an errand, visiting all twenty vertices of the map below (it will take a while to walk this, I hope). 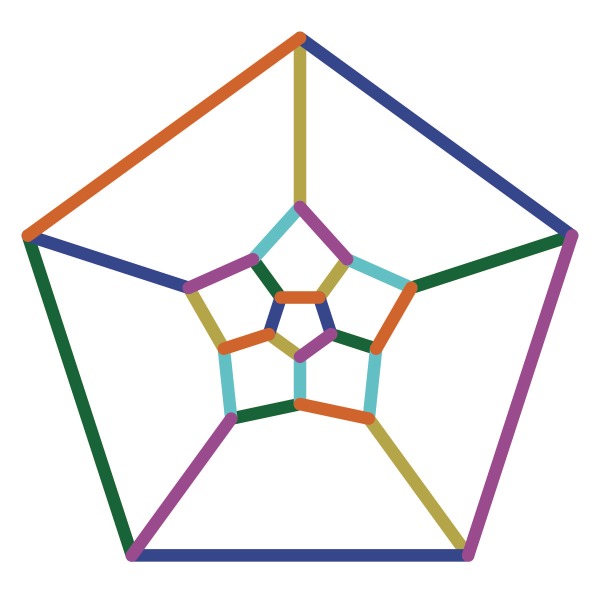 But there is a curfew. This means that you can only visit each of the twenty places once. If you are seen somewhere a second time, you become suspicious and will be eaten by a grue. You also need to end up where you started — sleeping in someone else’s home is suspicious.

Finally, traveling from place to place requires a special permit in the color of the edge along which you travel. So you will need to carry a few permits (being eaten by a grue is unpleasant). For instance, an orange permit will allow you to use any of the orange edges as often as you dare, but only those. There are six different colors, and hence six different permits.

Permits are expensive. What is the smallest number of permits that allows you to visit each place exactly once, returning to your starting point at the end?

There is a lot to say about a good cup of tea (and a good book). It’s time for my yearly post about the new First Flush Darjeeling teas.

My main source this year is again the Tea Emporium. I like that they are located directly in Darjeeling, use a traditional packaging, and have been consistent in quality over many years.

My favorites this year are the earliest invoices, in particular the invoice 3 from Upper Namring above.

Above are the leaves from 2018 and 2019 in comparison. I can’t see much of a difference, but the taste and smell this year is much more intense-floral.

Just before you steep the tea, rinse the leaves with near boiling water for a few seconds and smell them. There is nothing like this. 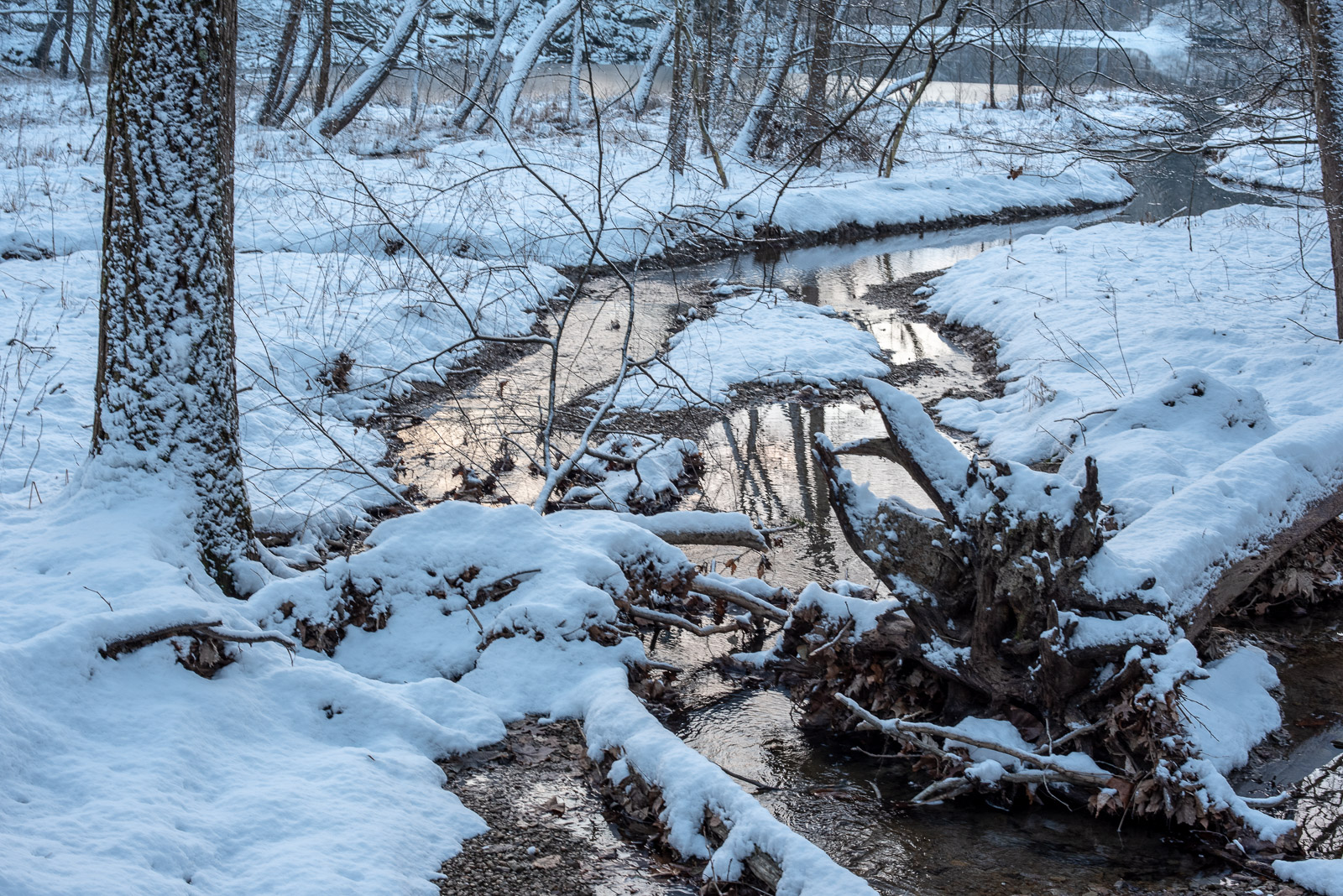 Now that winter has arrived here, it’s time for a warm cup of tea and a few in-house pictures of the experience, as threatened.

Late last year I received two small Pu’er tea cakes as a gift. My conception of tea has changed over the years from tea bags over branded tins with generic names to loose tea from single tea gardens, and my expectation likewise from powder to beautifully rolled leaves, to be consumed as fresh as possible.

So how would one dare to press tea leaves into bricks or cakes, and let them ripen? It helped a little that the cakes were nicely wrapped. So I took a quick course. Pu’er tea undergoes a special kind of fermentation that  can take many years. People buy raw Pu’er and let it mature like good wine. Alternatively, one can buy cooked Pu’er tea that has undergone a special procedure to accelerate aging. Prices vary considerably. Preparation is a story by itself.

One carefully breaks the cake into chunks. I placed about 10g of Ripe Pu’er into a steal tea infuser, and brew cup sized portions, using boiling waters. The first infusion steeps only 5 seconds to clean and loosen the leaves. Then I let the tea steep  for 30 seconds, increasing the time by 15 seconds for each subsequent infusion. This seems to do the job.

What you get is strong brew unlike anything else. It is very far away from the elegance of a Darjeeling or the floral delicacies of an Oolong. You get strong earthy notes, some fish, some mushroom, which I found, to my surprise, not unpleasant. Later infusions become more mellow and reveal complexity. The best: Near and far, I seem to be the only one around who likes it, so I can have it all for myself…

One of my enlightening tea experiences was a sample set that my little local tea shop in Bonn (now TeeGschwendtner and not so little anymore) offered many years ago: Four different early invoices from first flush Darjeeling teas. I had never had tea that expensive before, nor had I tasted tea like that. It changed my tea trinking habits dramatically.

This year, Harney & Sons are offering small tins with labels saying distinctively Tree 1 through Tree 4. These are harvests from four individual Song Zhong tea trees, each prepared in a different way. Harney characterizes them as floral/fruity/body/creamy. 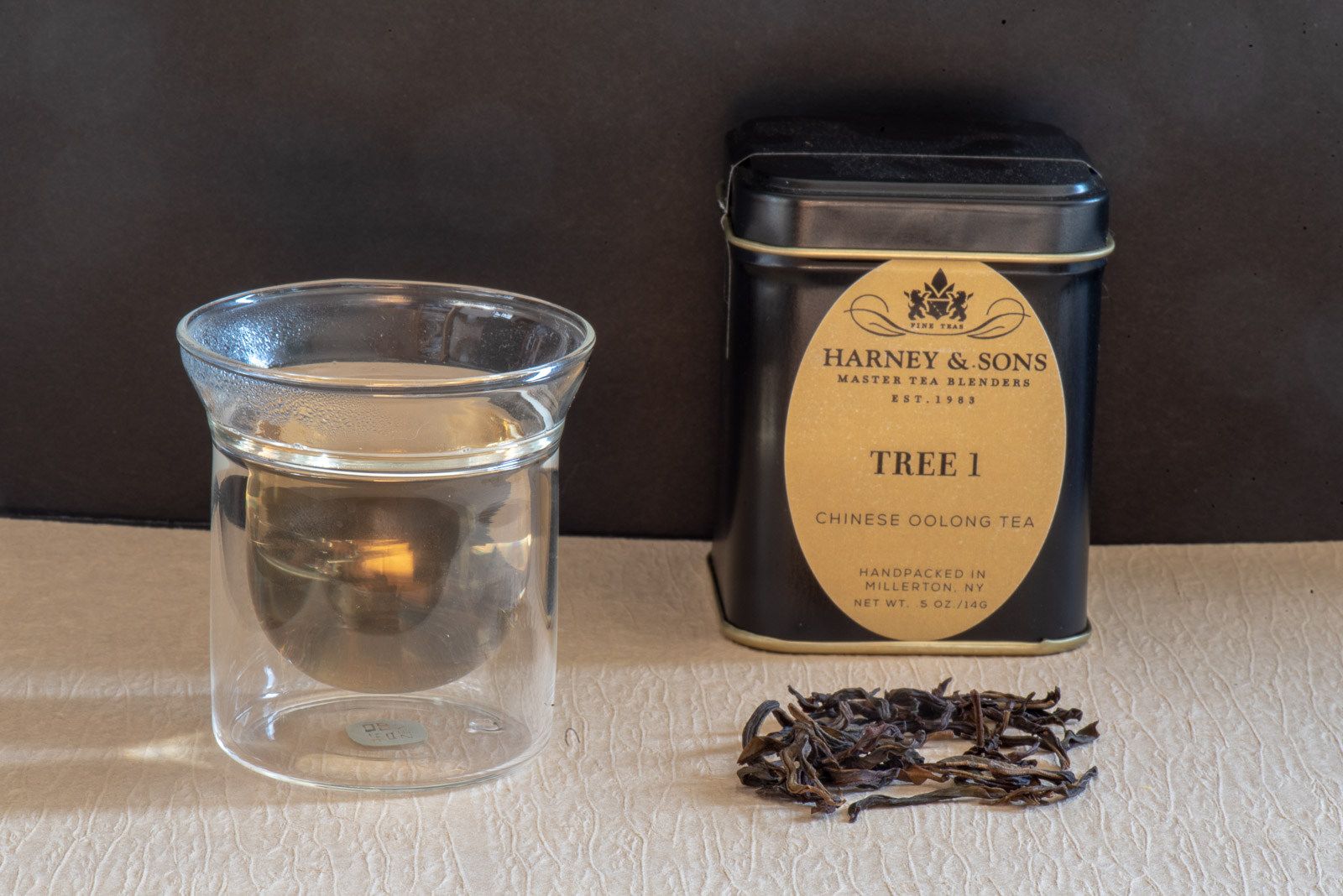 These are all Oolong teas with a slightly peachy flavor, and they are really all different in taste. In found the second one most interesting with strong Maracuya notes, and the last one rather blunt.

While not as mind-opening as my Darjeeling experience many years ago, this has still been a worthwhile experience.

Reportedly, Chinese buyers can purchase an entire tea tree and receive the yearly harvest over their life time. I would like that.

We have four Mimosa trees in the garden. They have been busy blooming for a while, and the fragrant flowers are a wonder to look at.

I couldn’t resist to harvest some of them and turn them into tea. 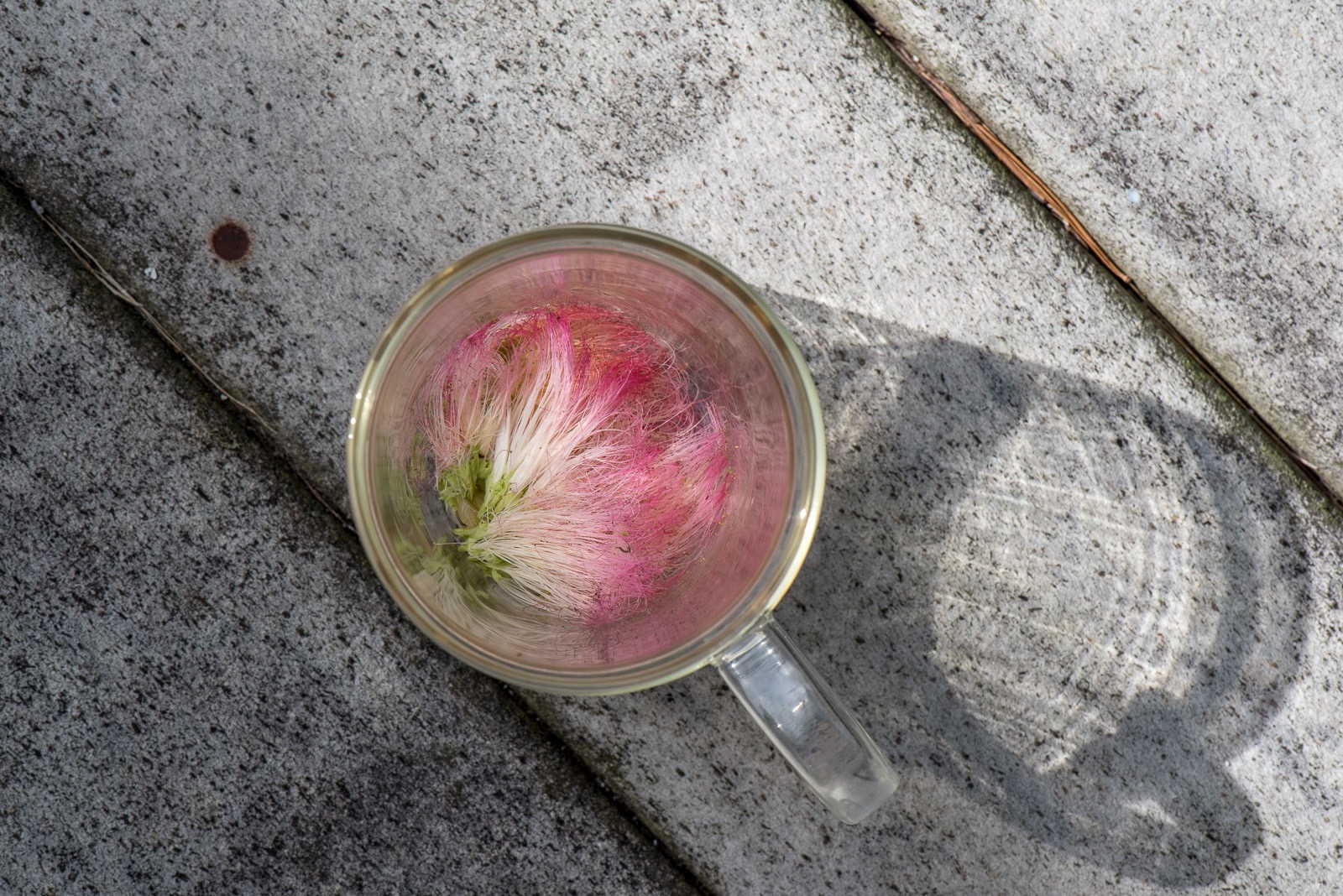 Half a dozen in a cup turn instantly pale green when infused with boiling water. 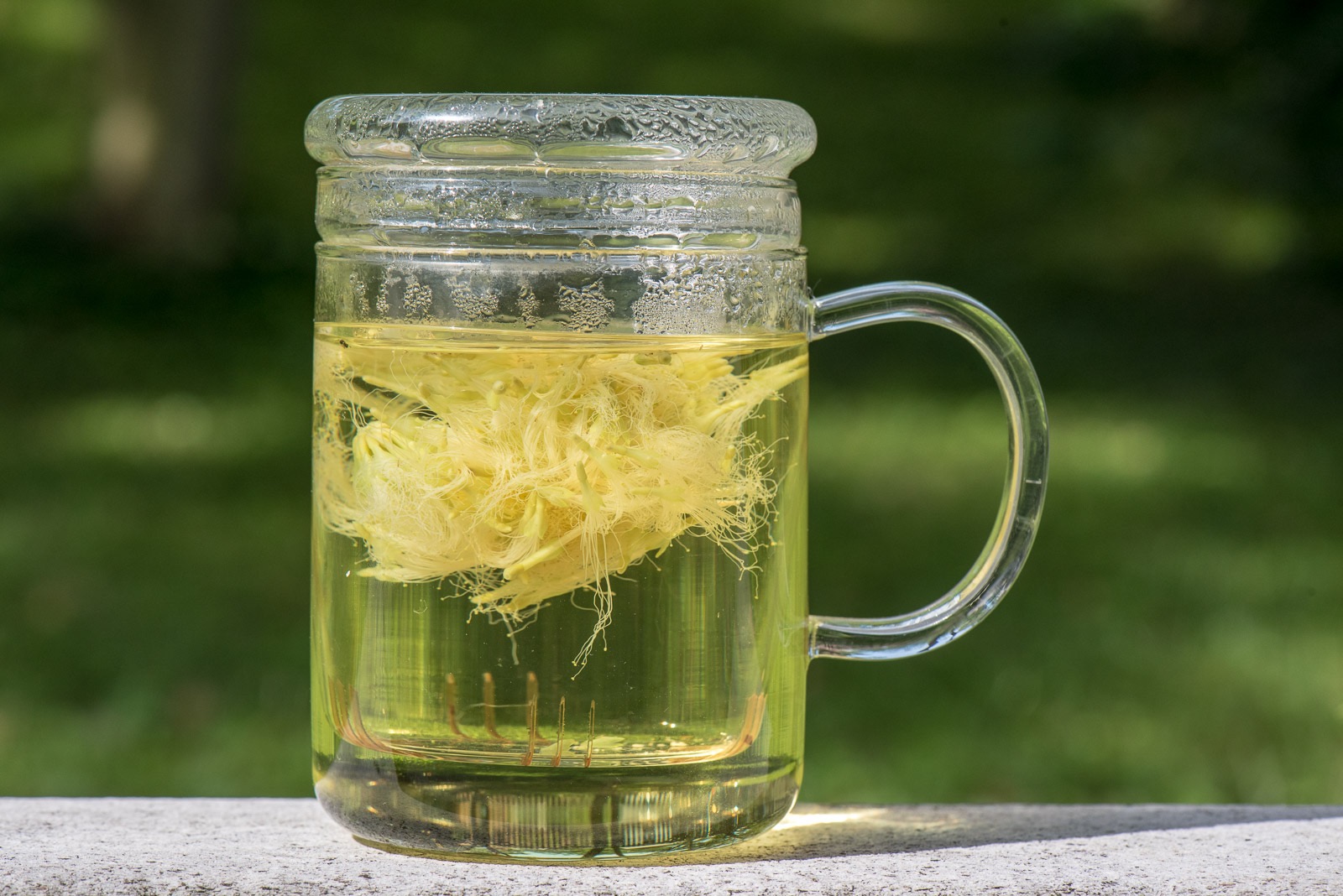 The cup is still bright green, and the typical mimosa scent is overpowered by a herbal note that is not really unpleasant but distracting. What did turn out more spectacular was to use some of the flowers for pressing and scanning. 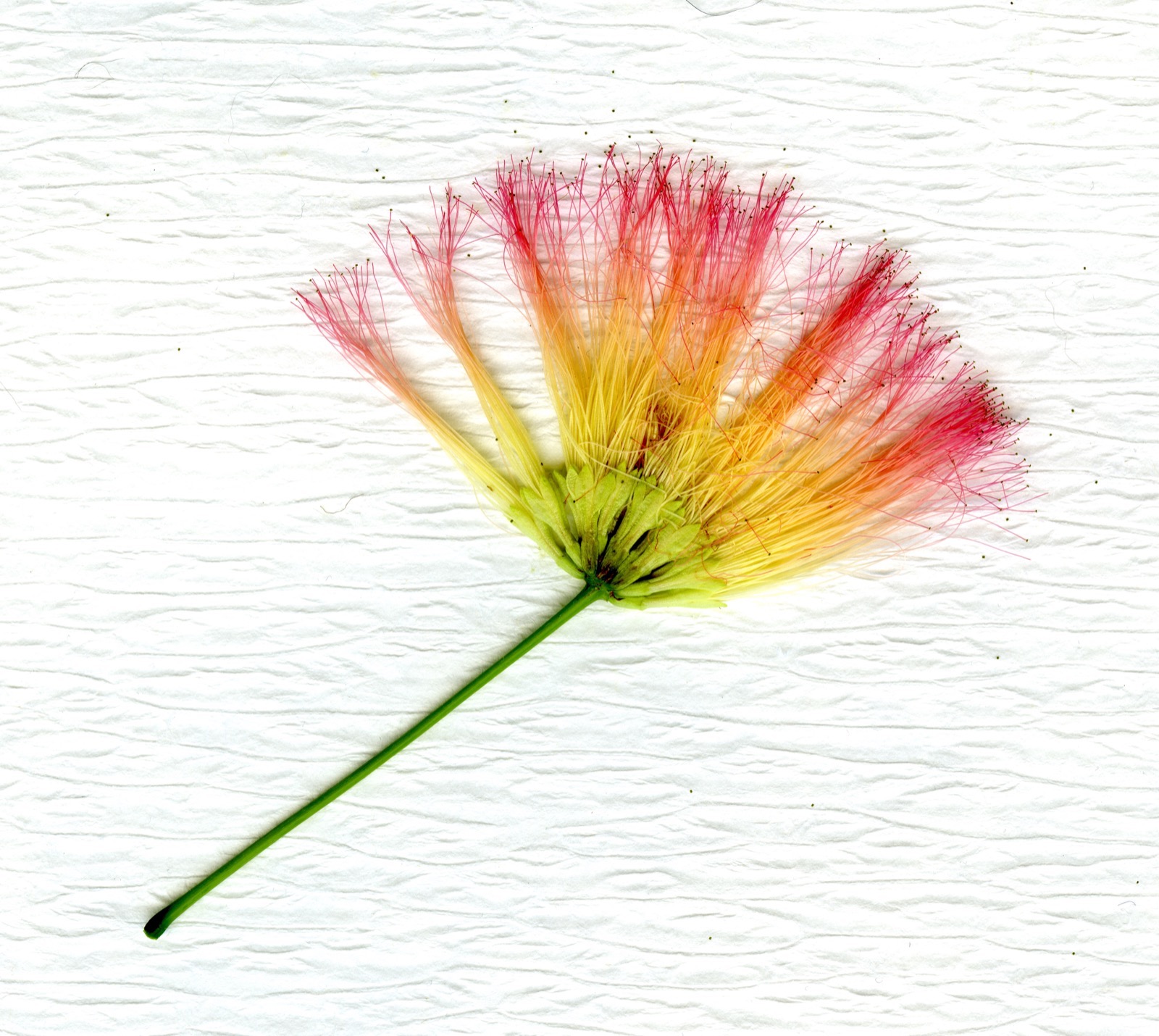 The colors became stronger after a day under heavy books.

This year I had a little of last year’s first flush Organic Moondrops tea harvest from the Puttabong garden in Darjeeling left, so when the new harvest arrived I decided to compare the two. 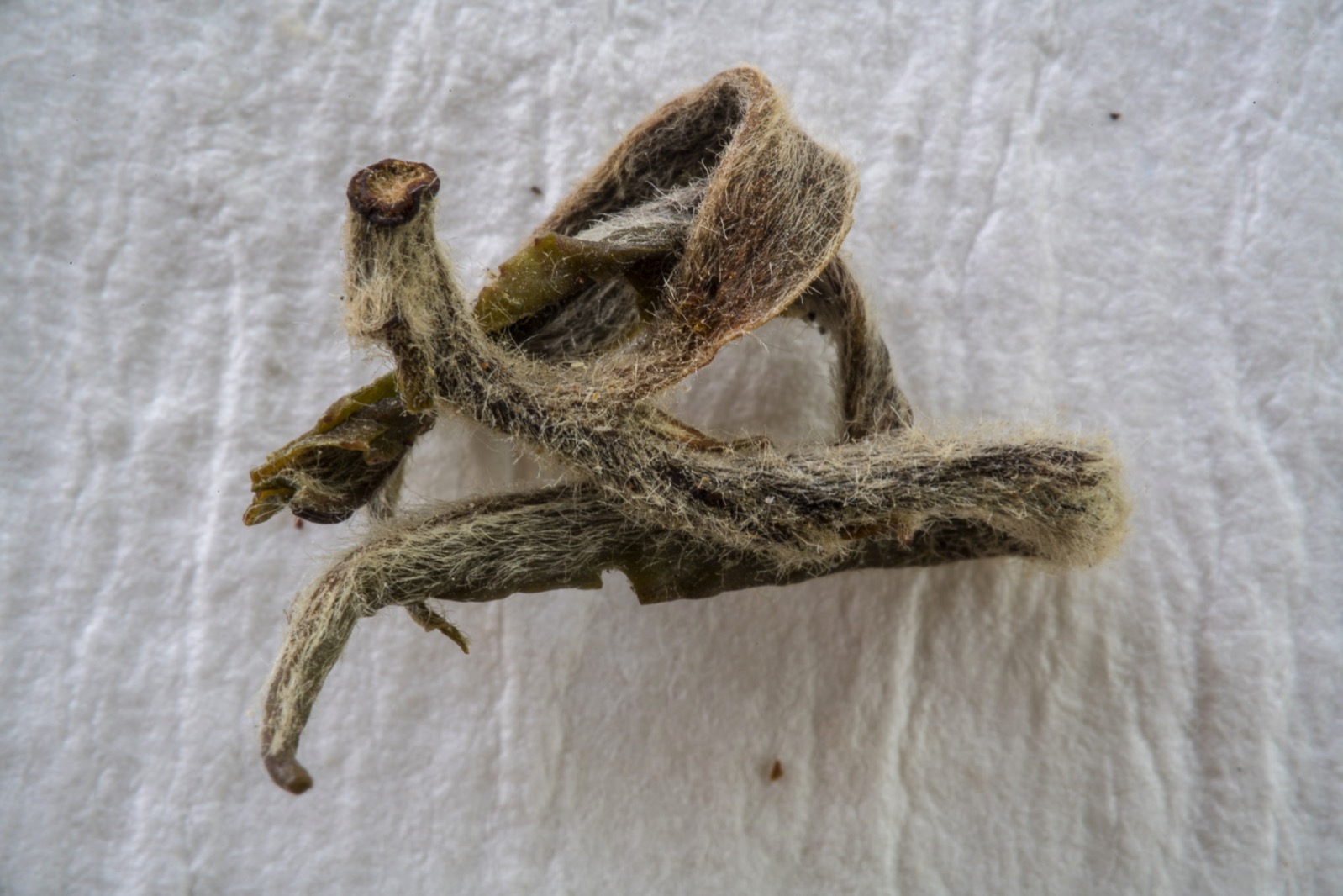 Both harvests show exceptional leaves (samples of 2017 above, 2018 below). Reportedly, this tea is harvested in the early morning hours when there are still dew drops on the leaves. 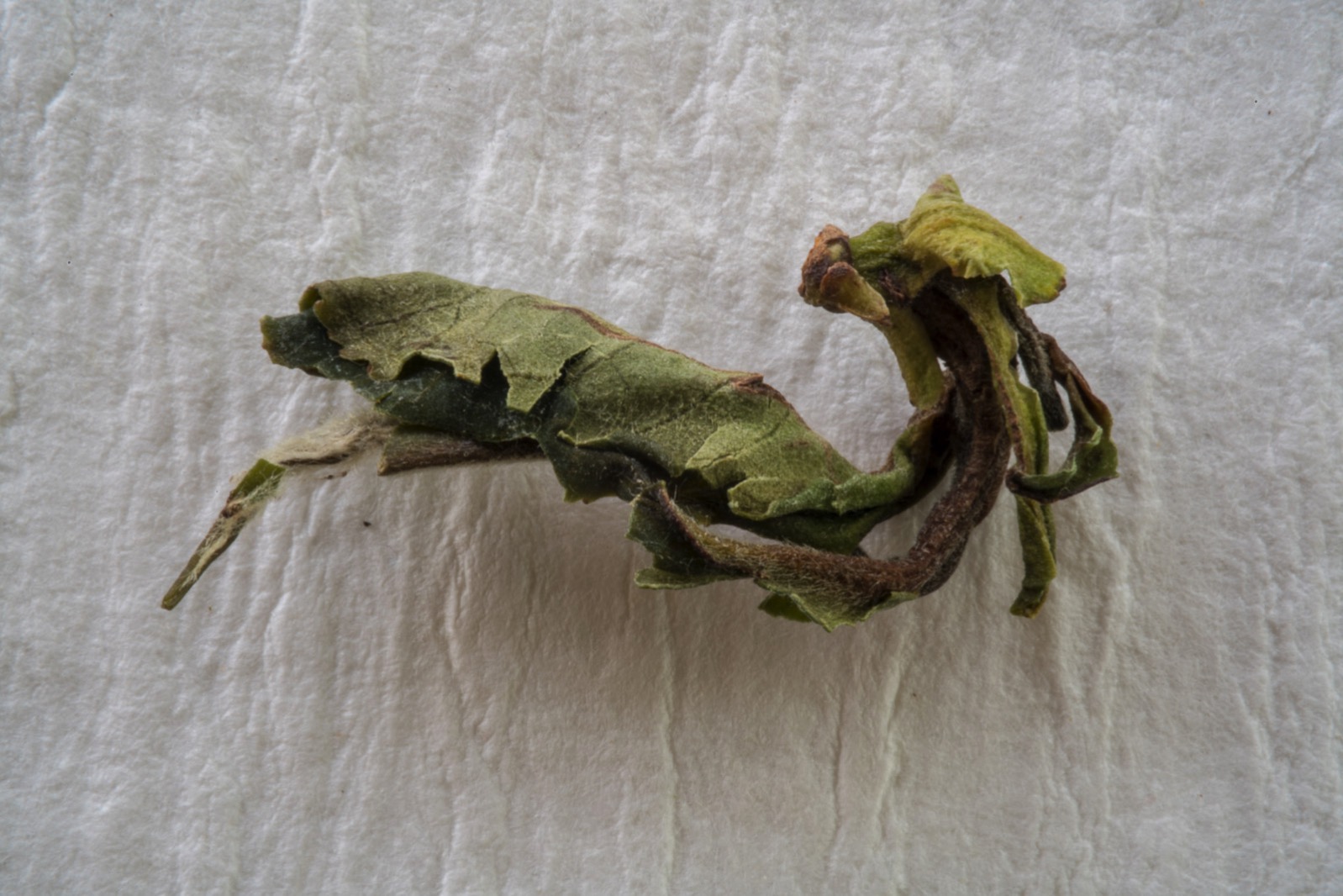 The overall appearance is that the 2017 harvest is more yellow, while the 2018 more green. 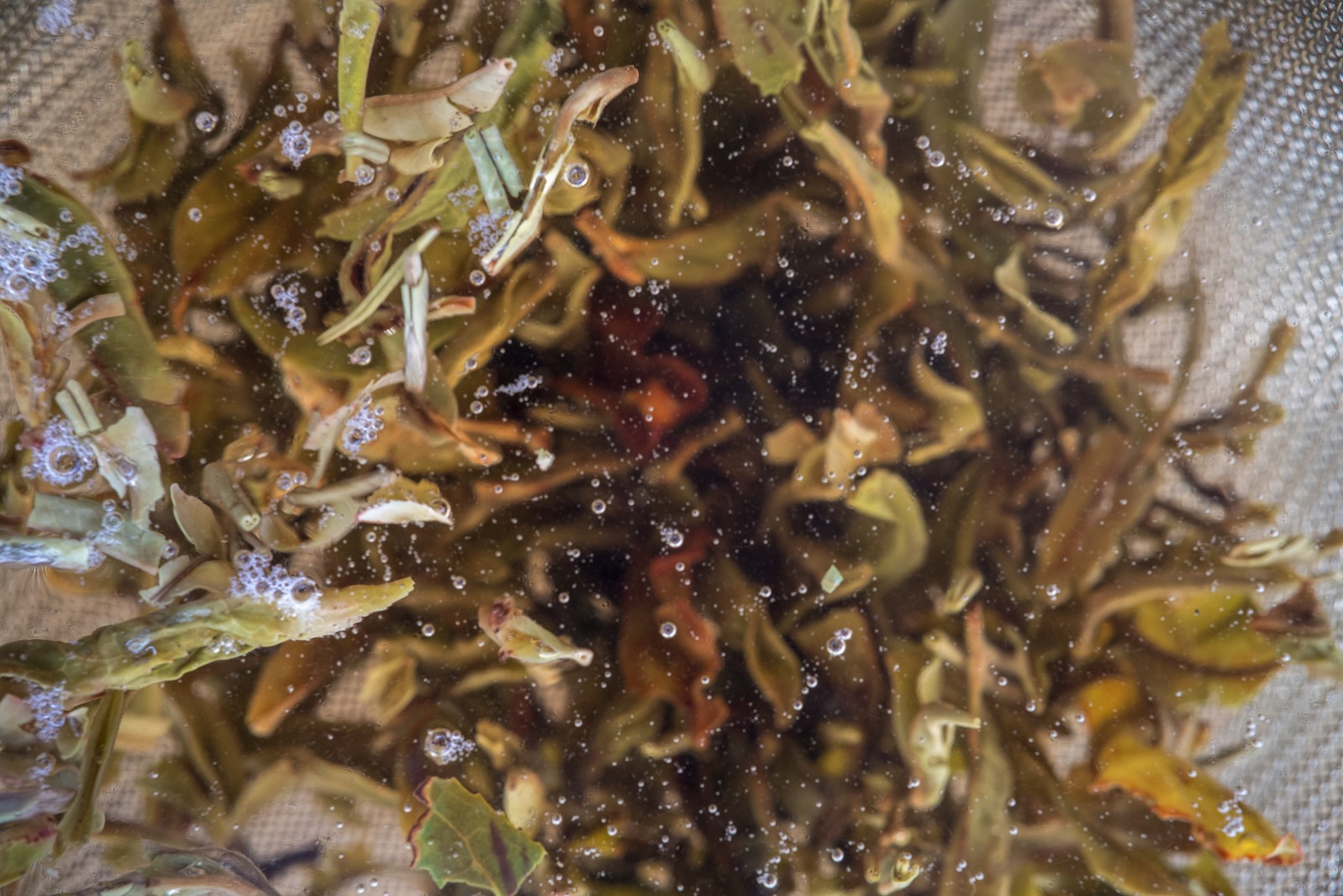 This becomes most evident in the pictures of the steeping leaves, and is clearly an effect of the leaves maturing over time. 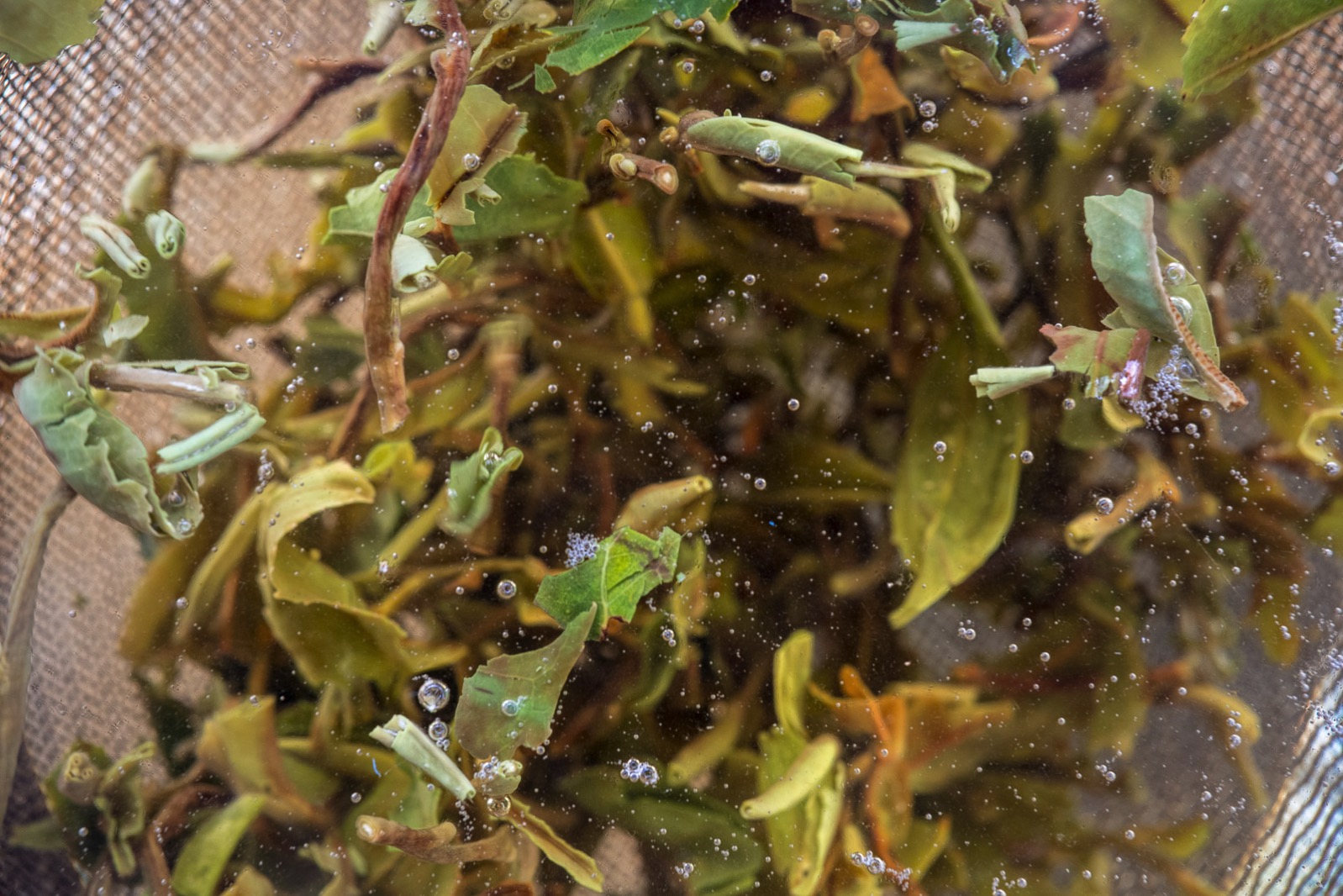 In the cup, there is no visual difference. The taste, however, is miles apart. Not only is the 2018 fresher with notes of green grass, it also has the slightly liquorish aroma of an execeptional first flush Darjeeling.

I think the 2017 harvest was generally rather problematic, so that the difference in taste is less a sign of aging but rather of a difference in quality of the harvest. 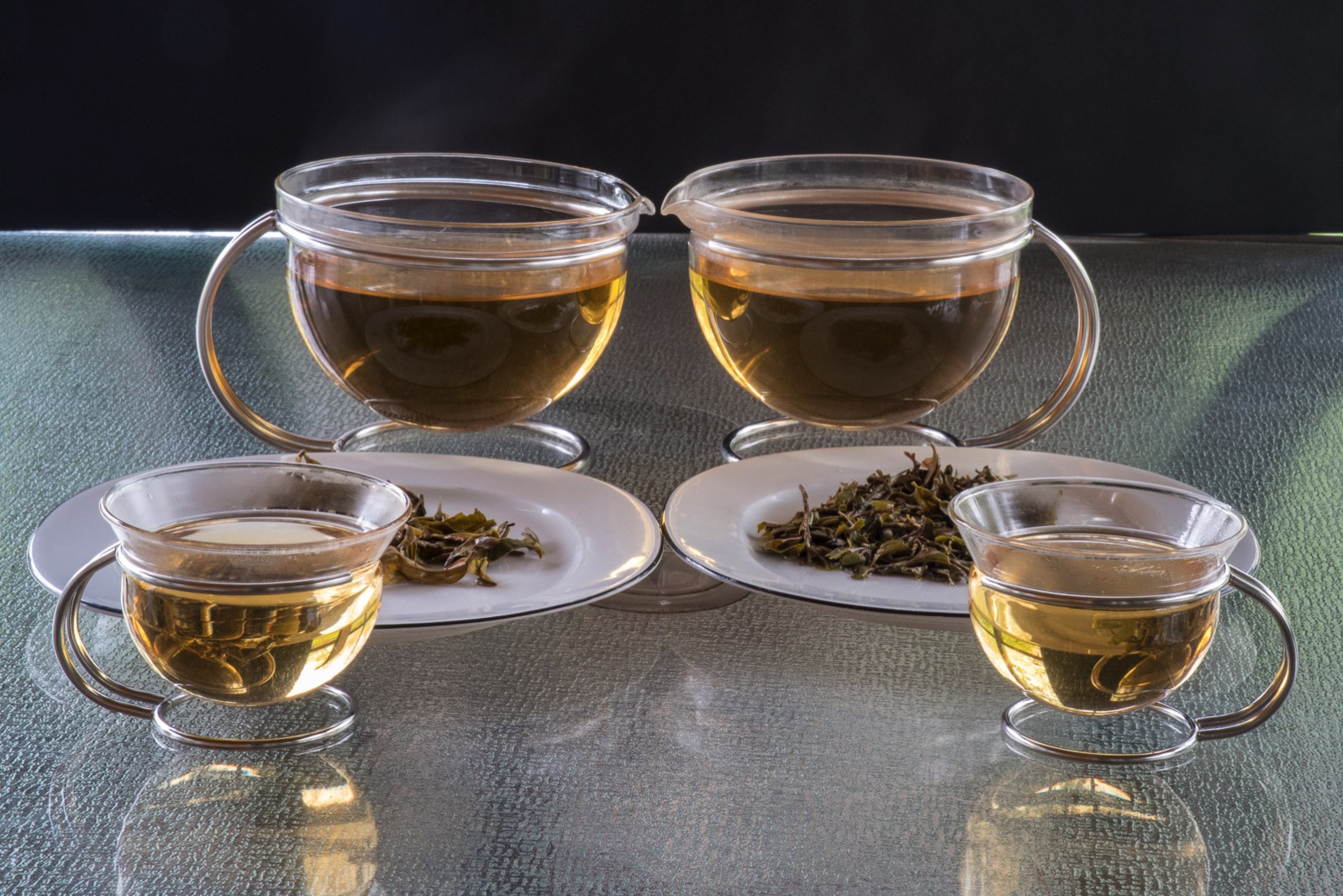 I was curious to learn what the effect of sweeteners on the taste would be, so I also tried both teas with a little Stevia added. While I found that this can occasionally enhance the flavor of teas (for example strong Assam teas), here it completely leveled out the differences between the two harvests. More precisely, the sweetened 2018 tasted almost exactly as the 2017 harvest. So, do not add Stevia to prime teas, you might loose the nuances.

This year everything seems to be late.

This is ok. Somewhat worse is that the prices for Darjeeling have gone up again. I can only hope that the workers benefit from it, too. 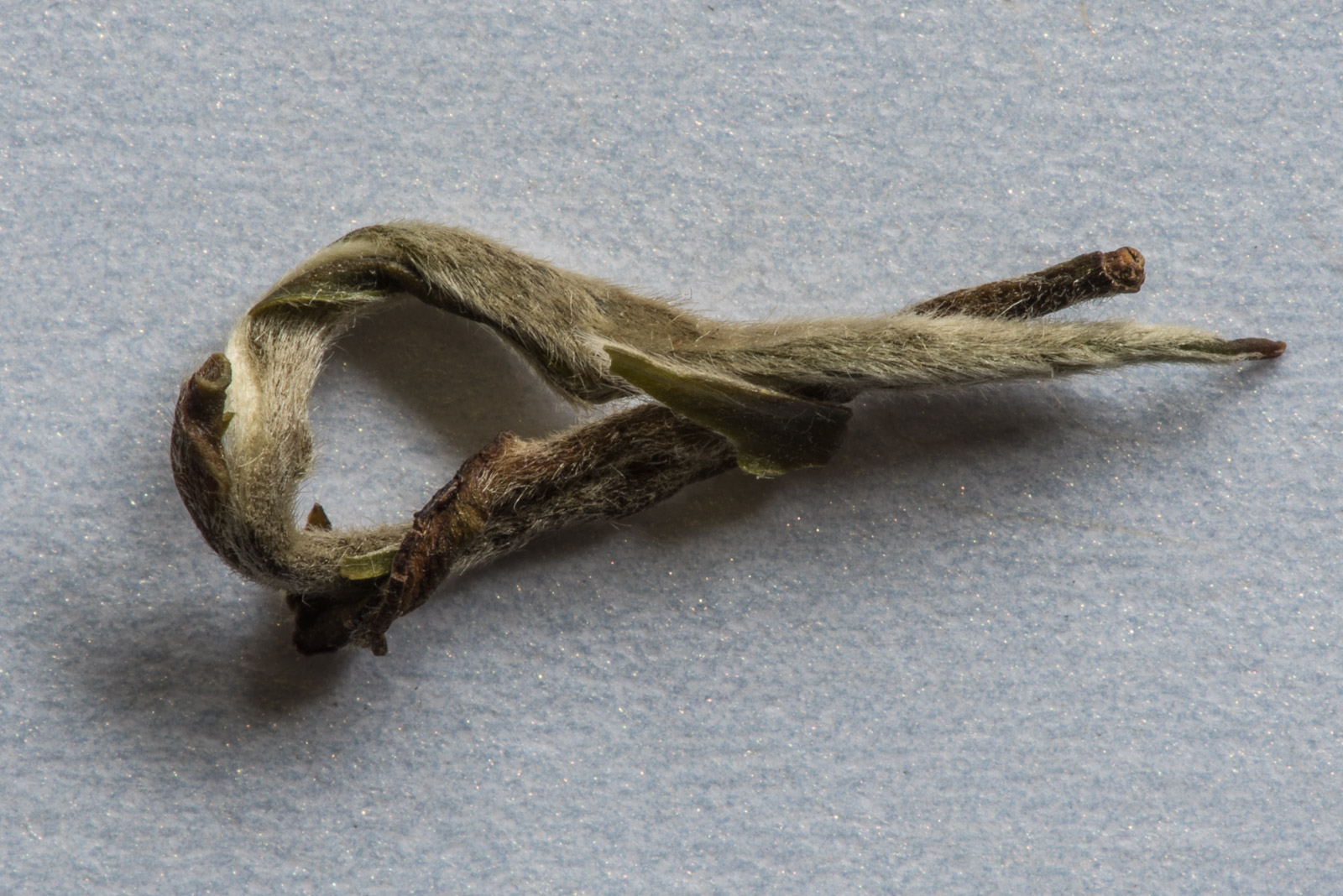 My favorite this year so far is the Upper Namring “Premium”. I don’t know whether these little epithets like “Premium”,  “Wonder”, “Exotic” or “Supreme” have a qualifying meaning; I liked it better when they would just call it “Invoice 12”, counting the harvests. But clearly that requires explaining, while everybody seems to understand “Wonder”.

This “Premium” harvest ic clearly not completely uniform, but I like the mix of bright green leaves with the rolled darker ones, this gives the tea a slightly grassy note in addition to the floral character of a powerful Darjeeling.

Next time I will try to visually convey the taste differences between 2017 and 2018 Puttabong Moondrops.

I used to think of Taiwan as the country of wonderfully floral, greenish Oolong teas. Only last summer I learned that they also make a few black teas, the most famous one called Ruby 18. This is one of the most intense black teas I have ever tasted: It shares strong chocolate notes with many Chinese black teas, but adds to it a malt and mint flavors. An intense experience. A second brewing is possible and more mellow. My latest delivery came from a company called Taiwan Sourcing.

The vaccuum sealed pouches were accompanied by a handwritten note and a sample in an even smaller pouch. The leaves of the Ruby are long and thinly rolled,

and expand quite a bit while being brewed. The history of this tea is remarkable. During the Japanese occupation, the Taiwan Tea Experimental Station researched local wild tea plants and their suitability for cultivating black tea. The crowning achievement became Ruby 18.

I didn’t know that the Japanese were interested in black tea. Apparently, they even used to export it, but the production has shrunk to very small quantities, and I never had any of it.

There are other black teas grown in Taiwan.Very different in shape and flavor (but also excellent) is the Imperial Grade Lalashan Organic Black Tea, a high mountain tea:

All this reminded of Twan Tan Eng’s wonderful book The Garden of Evening Mists, in which a Japanese gardener tends to a garden on a Malaysian tea plantation.

One of most spectacular green teas from Japan is the Gyokuro (jade dew), grown in the shade.

The cup is pale yellow and tastes a little like sea weed.

The steeped leaves are very soft. 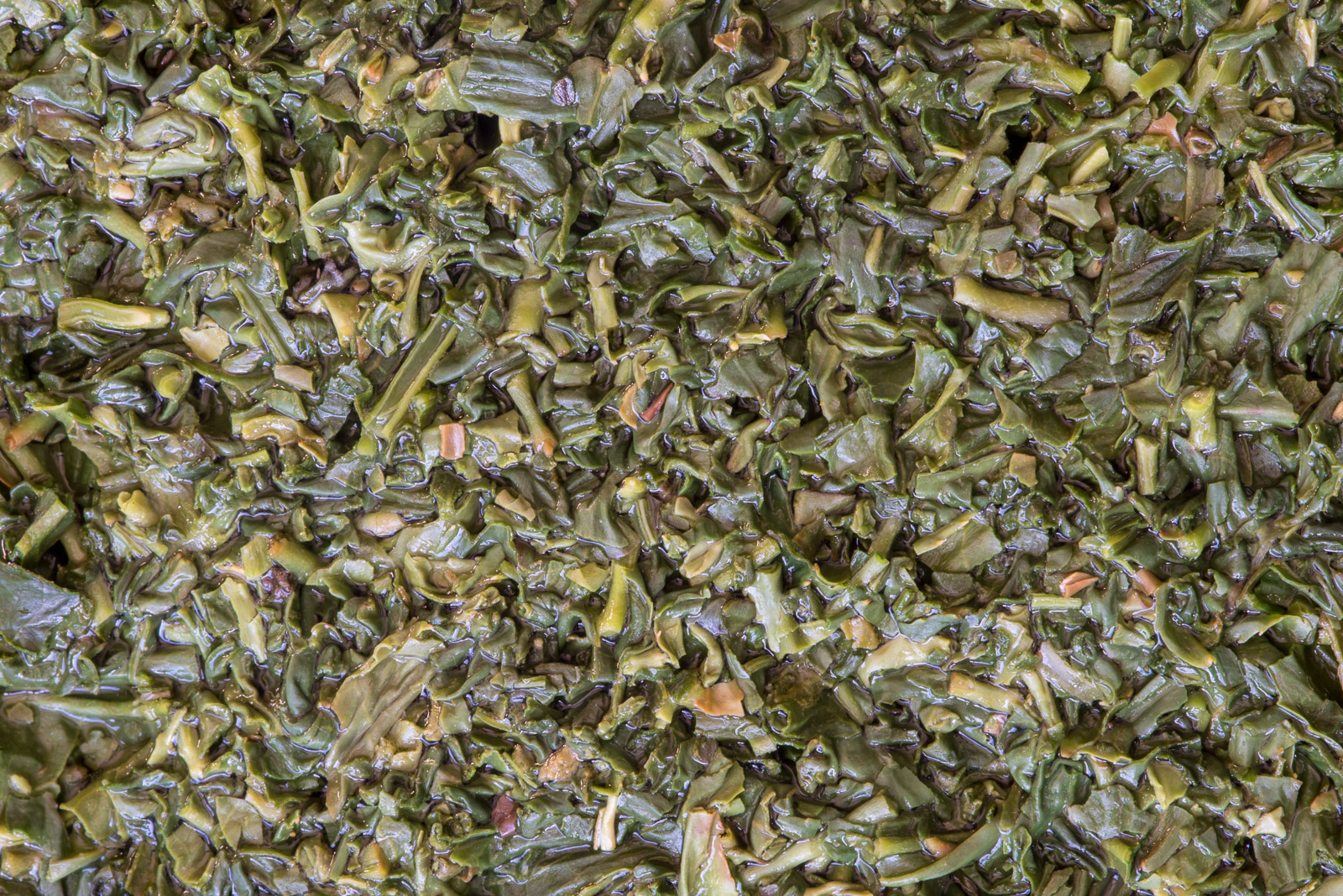 Instead of throwing them away, one can use them as a spread. I suggest a simple omelet.

Here is the recipe haiku:

Prepare Gyokuro. Save the leaves.

It’s this time of the year when to look back to see what has been memorable, in the good way. I discovered some wonderful teas, black teas from China. New for me were two teas from the Hunan province, both distributed in the US by reliable Harney & Sons.

The simpler of them is the Hunan Forest Twist that comes with long leaves that slowly uncurl in the pot while the tea steeps.

The taste is similar to that of a full-bodied Assam but without any bitterness.
The second tea from Hunan is the Wild Hunan Gold.

The leaves have wonderful golden tips, and the cup is a wild ride through intense chocolate notes. This tea clearly deserves its name.

Even more golden are the leaves of the Yunnan Golden Ring tea from the Yunnan province, purchased through Imperial Tea Court. I usually have one or two good quality Yunnan teas around because I like their soft and distinctive flavor, but this tea is something else.

The rolled golden leaves are amazing, and the tea, while clearly Yunnan, is more complex than the standard Yunnan, with subtle hints of chocolate.

The Inner Frame
Blog at WordPress.com.